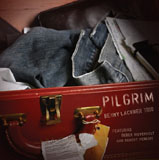 The rock-ish but very adult Pilgrim is a cautionary example of why detail is important in jazz. On a cursory listen, the Benny Lackner Trio sounds like a Bad Plus imitator: the rock influence is heavy, pianist Lackner shares Ethan Iverson's harmonic trajectory and heavy touch, and drummer Robert Perkins' sound is superficially like Dave King's bash-and-crash. What's more, the fifth track is titled "Brad Plus," a dead giveaway if ever there was one. That first impression is illusory. Deeper exploration reveals that Pilgrim, a contemplative project in many moods, is also quietly visionary.

The sensitivity with which the group imbues the music is immediately apparent. There are no fast pieces on Pilgrim, although the groove in "K.W.S. Nightmare" is pretty close. Instead, all are slow-to-medium in tempo, walking (not swinging) in rhythm, and reflective in temperament. They also have an edge of darkness creeping in, often represented by ominous minor chords. But it's for moodiness rather than disturbance, and it's held in abeyance by expressive but cerebral lines from the musicians. The title track and "Blind" are particularly stunning, the former's melody as insistent as a nagging memory and the latter's with both the consolation and pangs of some evening's bittersweet aftermath.

But subtlety marks the trio's approach. Bassist Derek Nievergelt is elusive throughout Pilgrim—no small trick for a three-man band. Nievergelt's playing depends on marvelous sustains and rubbery glissandi that are concentrated in his instrument's lowest register. It allows him to slip easily into Lackner's left-hand comps and Perkins' accents, but also provides a thick-if-invisible mortar for the structures of tracks like "Transkei" and "Beyond."

The other two musicians are equally subtle, if more noticeable. Lackner's similarities to Iverson remain undeniable, but so does his lyricism and genuine soul. His work on the gentle "Let It Die" draws equally on inspirational gospel and the 1970s singer-songwriters. Perkins plays accents that make him sound noisier than he actually is—if anything, he's the most sophisticated colorist in the group, with his hand percussion, shimmery cymbals, and hints of electronic rhythm (sometimes, as on the opening "Mowgla," he uses all three). In fact, all three players use electronics, one of their most idiosyncratic and effective components. Again these are employed with great discretion, as in the bleeping background on the title track and faint keyboard counterpoints on "I Never." With these little touches, the group shows they understand that they need only create an atmosphere, not a hurricane.

Their identification as a leaderless collective seems disingenuous; there is, after all, only one member mentioned in the band name. But the Benny Lackner Trio leaves no doubt that all three lend their visions to the crafting of the longing, wistful music on Pilgrim. If the group betrays the influence of the "It" piano trio of the 2000s, that's perhaps inevitable; still, it doesn't stop Pilgrim from being intensely individual or personal music. The emotional heft makes it a moving experience, but the painstakingly embedded details demonstrate its considerable art.