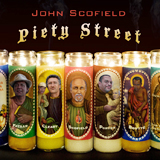 John Scofield's Piety Street is an exercise in musicology, but it's also much more than that. Without sacrificing the prominence of his electric guitar playing—just utilizing it from a different perspective—this gospel blues album further demonstrates how he has executed similar fusions, in altogether different contexts, throughout his extensive 36-album career.

Just as Scofield doesn't play in an obvious way, simultaneously staccato and fluid, so, too, does he pursue his renewed interest in blues from an unusual angle. "That's Enough" sounds like a simple declaration of faith, but what's noteworthy about the track is the supple means by which Scofield plays around the vocals— that's in addition to the shimmering sequence the guitarist/bandleader sprinkles upon the thick cushion of organ on "The Angel of Death."

Scofield's fond appreciation of the well-wrought compositions on Piety Street does not come at the expense of improvisation. The guitarist's forte goes on display in the low-key reggae ride-out of "Motherless Child," which leads logically into "It's a Big Army," the arrangement of which is as straightforward as a shuffle can be. The insistent pace there further quickens through the interplay of Scofield with keyboardist/vocalist Jon Cleary and, later in the track, a snappy percussion interlude that serves to highlight the massive yet somehow unobtrusive bottom supplied by George Porter Jr. The famous bassist's coupling in rhythm section with drummer Ricky Fataar (like Cleary a member of Bonnie Raitt's band) is on prominent display in the mix—clean and uncluttered, to accentuate the simplicity of the material.

Scofield fans, and those curious about the concept of Piety Street, will find some songs familiar—"Ninety Nine and Half," "I'll Fly Away"—and some not so much, like the limber instrumental, "But I Like the Message." And while there will certainly be those who long for more Scofield guitar and more extensive jamming, as on the serene "The Old Ship of Zion" (the sole 12-bar tune here), there's abundant nuance in the consistent intros Scofield supplies to presage the vocals throughout the album.

Given this man's fondness for the rhythmic aspect of playing, going back through his "Uberjam" phase, and his work with Medeski, Martin and Wood—as well as with mid-'80s Miles Davis and the '70s Billy Cobham/George Duke aggregation—it's no surprise "Never Turn Back" has more than just a suggestion of syncopated funk. There's a tangible sense of joyful release in the musicianship here—extracted, no doubt, from the sound of songs like "Just a Little While to Stay There," which provides continuity from Piety Street to John Scofield's work under his own name and with others: each and every one is suffused with passion.