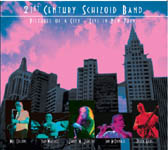 It's been 37 years since In the Court of the Crimson King dispensed with preconceptions of what rock music could or should be. And while Robert Fripp, a King Crimson co-founder and the group's only remaining original member, has steadfastly kept his eye on the future, archival reissues—including two outstanding Discipline Global Mobile retrospective box sets, The 21st Century Guide to King Crimson Volume One: 1969-1974 (2004) and Volume Two: 1981-2003 (2005)—have enabled an ever-increasing base of younger fans to go back in time and hear the music from Crimson's early days.

Fripp has clearly been uninterested in revisiting those glory days. But the 21st Century Schizoid Band has, since forming in 2003, toured Europe, Japan and the United States, performing the best material from Crimson circa 1969-71 without Fripp's involvement. With four alumni from that time and one newcomer—guitarist/lead vocalist Jakko M. Jakszyk—21CSB's latest release, Pictures of a City, is proof that not only can you go back, you can even improve on the original.

The problem with those 1969 and 1971 touring bands was that, being quartets, they could never recreate the larger sound of the studio records. If Fripp and woodwind multi-instrumentalist/occasional keyboardist Mel Collins were playing the dual-mellotron attack of "Cirkus," from Lizard (Discipline Global Mobile, 1970), Fripp couldn't deliver the equally signature acoustic guitar work. 21CSB's Collins and Crimson co-founder Ian McDonald can team up on keyboards, leaving Jakszyk free to concentrate on guitar. They can also double up on saxophones, making live versions of "Pictures of a City," from In the Wake of Poseidon (Discipline Global Mobile, 1970), and "21st Century Schizoid Man," from Crimson's debut, actually more powerful and faithful than those played live by early incarnations.

Bassist Peter Giles, though he only appeared on In the Wake of Poseidon, was unquestionably the best and most flexible Crimson bassist of the entire 1969-74 period, playing with John Wetton's intensity on "Starless"—the only tune outside the primary 1969-71 timeframe—and with Boz Burrell's inherent and unshakable simplicity on "Formantera Lady" and "Sailor's Tale," both from Islands (Discipline Global Mobile, 1971).

21CSB's original drummer and Crimson co-founder Michael Giles has been replaced by Islands' Ian Wallace—who, with a lifelong career as studio gun for hire, not to mention the man behind the Crimson Jazz Trio's The King Crimson Songbook Volume One (Discipline Global Mobile, 2005), brings a greater diversity to the mix. He's reverent to the material's defining characteristics but with his own strength of groove.

Aside from two original tunes and Mel Collins' flute trio intro to "Cadence and Cascade," 21CSB delivers a stunning, inventive and surprisingly relevant early Crimson greatest hits package never before heard on the concert stage. And while there's a proliferation of tribute bands these days, 21CSB's lineup of mainly Crimson alumni brings authenticity and answers the question of where Crimson might have gone had it remained in the symphonic arena.

CD1: Pictures of a City; Catfood; Let There Be Light; Cirkus; Spend Us Three; Cadence and Cascade; The Court of the Crimson King; Ladies of the Road; Cately's Ashes; Formantera Lady; Sailor's Tale. CD2: I Talk to the Wind; Epitaph; 21st Century Schizoid Man; Starless.