BY MATT HOOKE
September 1, 2018
Sign in to view read count 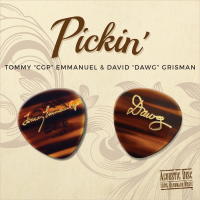 Listening to Pickin' begs why it took so long for guitarist Tommy Emmanuel and mandolinist David Grisman to collaborate. The album is not a mere showcase for the duo's considerable technical abilities but is a showcase for Grisman's phenomenal songwriting. Grisman wrote every song on the album except the standard "Sweet Georgia Brown," and the Australian drinking song "Waltzing Matilda." The album has Grisman's "Dawg Music" style, a unique mix of bluegrass, jazz, and folk, flowing through its veins. Emmanuel, whose own approach draws from the same genres, is more than happy to play in the dawg pound.

Pickin' has the feel of a fun porch front jam, as if the two musicians just decided to sit down, drink a couple beers, and play some of their favorite tunes. "Cinderella's Fella" has a beautiful mandolin melody, and Emmanuel's easygoing, understated accompaniment complements it perfectly. "Newly Wedding" has a melody reminiscent of Roberta Flack's classic "Killing Me Softly with His Song" and, much like Flack's original, this song is a winner. The album is not just tender ballads. High energy tracks such as "Port Townsend Blues" benefit from the casual easy going nature of the album, and make for a good mix of tempos to keep things interesting. Emmanuel's percussive style, where he slaps the body of his acoustic guitar, combined with his ability to play harmony and bass lines at the same time, ensure that the song sounds complete despite the sparse instrumentation.

"Waltzing Matilda" ends the album on a perfect note. The somber track is a stunningly beautiful rendition of the classic track that may bring tears to the eyes of even the most stone-hearted. Emmanuel and Grisman do a great job of remaking the folk song into something more, adding a variety of interesting harmonies, along with several rhythmic changes to the standard. Grisman's tremolo picking, provides a stark contrast to Emmaunels finger plucked melody.

The interplay between Grisman and Emmanuel is incredible on Pickin' , both have a mastery of their respective instruments. More importantly they understand the difference in timbre between them, enabling them to create accompaniments that perfectly fill in each others gaps, Emmanuel filling in the bass and mids, Grisman on the treble. Neither artist tries to one up the other, instead they play to each other's strengths. Hopefully Emmanuel and Grisman decide to collaborate again soon.