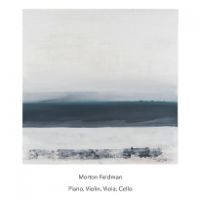 "Piano, Violin, Viola, Cello" (often abbreviated to "PVVC") was Morton Feldman's final composition, receiving its premiere on July 4th 1987, less than two months before the composer's death from pancreatic cancer on September 3rd. This recording of the piece dates from January 2017 at Henry Wood Hall, where it was recorded by Simon Reynell. The quartet of Mark Knoop on piano, Aisha Orazbayeva on violin, Bridget Carey on viola and Anton Lukoszevieze on cello had performed "PVVC" the previous September at Café Oto, on a night that stuck in the minds of musicians and audience, alike, for being one of the year's hottest.

Having come through that night successfully, the January recording afforded the quartet a valuable opportunity to apply what they had learnt from the Oto performance and the audience's reaction to it. As Knoop has commented, "I always like returning to things after a first performance as there are some aspects of the music which can only reveal themselves in performance, no matter how much rehearsal is done."

The recording runs for seventy-four minutes, making it a challenge to maintain concentration both for the performers and the listener. The composition is as uncomplicated as its title suggests. Lacking any formal structure or obvious peaks and troughs, it evolves at its own glacial pace, with the introduction of even the smallest motif acquiring significance. While it is in progress, its twin fascinations lie in the smooth, effortless ease with which Feldman achieved that evolution without disquieting the listener, and the skill with which the quartet perform the music without occasioning comment.

Throughout, piano and strings operate together as an integrated unit, seeming to think, move, inhale and exhale as one. Altogether, it makes a beguiling listening experience but, because of that, concentration can easily be lost. With time and effort, it is possible to maintain focus throughout, whereupon the true beauty of the piece reveals itself, more and more with each new listening. An important and valuable addition to both the Another Timbre catalogue and the Feldman discography.