By Karl Ackermann
February 20, 2014
Sign in to view read count 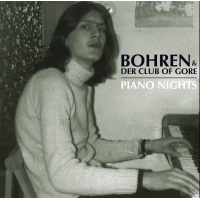 Of the many hard-to-define sub-genres of jazz, "dark jazz" may be the most challenging to classify. Exemplifying the category is Bohren & der Club of Gore's Piano Nights . The German quartet, whose members have a variety of doom metal origins, has morphed their earlier inclinations into a hybrid that has little to suggest the player's roots. Unequal parts of ambient, experimental and modern jazz, it represents the most radical career transition since Charles Lloyd joined the The Beach Boys.

Founded in 1992, Bohren & der Club of Gore have long had a following in Europe, recording eight studio albums beginning with the guitar and bass focused Gore Motel (Epistrophy, 1994). Minimalist-ambient pieces pervaded until the 2000 release Sunset Mission (Wonder, 2000) which saw one of the two original guitarists—Reiner Henseleit—replaced by multi-instrumentalist Christoph Clöser. The latter added a decidedly jazzier element to the group dynamic and as a result, his first collaboration is a largely undiscovered masterpiece.

Piano Nights is pastoral and desolate at the same time, seeing beauty through crumbling façades. The music rarely rises above a whisper yet even the silences take on an emphatic air. There is an ambience of mystery and quiet urgency in each of these pieces and the music requires patient listening. It is not until "Ganz Leise Kommt Die Nacht" that Clöser's quietly smoky saxophone seems to speak out of the darkness, elevating the tempo from exceptionally down-tempo to just very slow. Similarly on "Segeln Ohne Wind," the tentative upshift in tempo is reluctant to break into the light.

Though there is a consistency in the tone of these pieces, there are variations that present themselves in subtle ways such as the occasional mournful sax in contrast to the almost-cheerful aspects of the vibraphone or the somber spaghetti western flavor of Komm Zurück Zu Mir. Piano Nights aesthetic sense is part Brian Eno, part early Pink Floyd. Eerie, foreboding and weighty, often simultaneously, Piano Nights is beautifully austere throughout. It is an eccentric and stunning extraction of an erudite outer jazz experience.