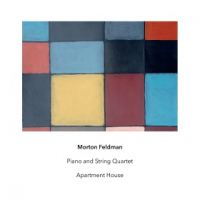 It seems almost inevitable that the five-star, five-disc box set Morton Feldman Piano (Another Timbre, 2019), by Apartment House pianist Philip Thomas , should overshadow Feldman releases on Another Timbre and other labels, not least because of its six-hour duration and Thomas' exquisite performances. However, as the Another Timbre catalogue reveals, there is far more to Feldman than his compositions for solo piano. Two Pianos and other pieces, 1953-1969(Another Timbre, 2014) featured Thomas and John Tilbury playing pieces for two pianos, and being joined by Catherine Lawson then Mark Knoop to play pieces for three or four pianos; in addition, that album included pieces in which one or more pianos were joined by other instruments, played by members of Apartment House. In a similar vein, on Piano, Violin, Viola, Cello (Another Timbre, 2017), pianist Knoop was joined by three string players on a performance of the 1987 title composition.

All of which brings us to Piano and String Quartet, a recording of the 1985 title composition, made at Henry Wood Hall in South London in March 2021, by Apartment House, featuring Knoop on piano, violinists Mira Benjamin and Gordon MacKay, violist Bridget Carey and cellist Anton Lukoszevieze. The composition was originally commissioned by the Kronos Quartet and pianist Aki Takahashi, and was premiered in November 1985 at the New Music America Festival in LA. The Kronos Quartet's founder, David Harrington, said of the composition, ..."I think Piano and String Quartet is one of his great, great pieces. It's almost like feeling these incredible, warm, slow, beautiful drops of water over a long period of time." And, after Feldman's 1987 death, composer Steve Reich was quoted as saying the composition "is the most beautiful work of his that I know."

This version of the composition strongly supports such opinions. All five players are in peak form—unsurprising as, in January 2021, Apartment House had played three concerts in a single day at Wigmore Hall, London, the last of which had featured "Piano and String Quartet." The piece itself has a structure that remains consistent throughout, with a two or three note arpeggio from the piano being answered by the strings; nothing sounds rushed or pressurised, giving the listener ample time to digest and appreciate every sound. The sounds of the piano arpeggios make it all too clear why Harrington used the simile of drops of water in the quote above. Altogether, this is a calm, soothing work which improves with repeated listening. Beautiful.