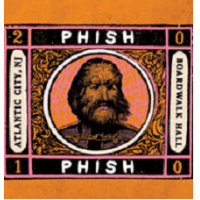 Phish's "Musical Costumes" fully hit their stride with 2009's Halloween cover of the Rolling Stones' Exile On Main Street (Rolling Stones, 1972). That show was the first Halloween "Musical Costume" show since 1998's cover of The Velvet Underground's Loaded (Cotillion, 1970) (and the subsequent cover, a month later, of Pink Floyd's Dark Side of the Moon (Capitol, 1973)). So, what was America's favorite over-talented garage band, Phish, to cover in 2010? Guitarist Trey Anastasio was coy in interview with Pop and Hiss , stating, "This year, this one's for me. The one we picked, I'm going to get more out of this as a musician than I ever have before. Three songs into it, I called everybody and told them, 'None of the other ones—I wouldn't think, hopefully—will have nearly the effect on my playing this one's going to.' "

Several source albums were considered. Derek and the Dominoes' Layla and Other Assorted Love Songs (Atco, 1970), the Jimi Hendrix Experience's Are You Experienced (Reprise, 1967), Led Zeppelin (Atlantic, 1969) and Led Zeppelin IV (Atlantic, 1971). But it was Little Feat's 1978 live set Waiting for Columbus that won out in 2010. Little Feat's masterpiece, recorded and released during the band's disintegration and only months before founder Lowell George's death, is rivaled only by the Allman Brothers' At Fillmore East (Polydor, 1971) as the finest rock live album recorded.

As with the band's performance of Exile On Main Street, Phish put their own spin on Waiting for Columbus, one that remains completely true to the music while not making it a stiffly rote act of reverence. While Phish will not be mistaken for a group of exceptional vocalists, its members nevertheless all sing with a lyricist's confidence and conviction. The show is introduced with the original Feat soundtrack of "Join the Band," followed by a spelling of F-E-A-T (by the announcers and "Ph-I-S-H" by the expectant crowd).

Anastasio eschews the slide guitar in favor of his excellent and informed standard playing. He does this to great effect on "Fat Man In The Bathtub" and "Mercenary Territory" and anywhere Lowell George's unique slide style was apparent. The "Ventalator Blues" of this performance is a molten "Spanish Moon," featuring percussionist Giovanni Hidalgo and Phish's estimation of the Tower of Power horn section. Tenor saxophonist Stuart Bogie is potently effective on "Night and Day" and "Mercenary Territory."

Treatment of the concert centerpiece, "Dixie Chicken/Tripe Face Boogie" is pure ambrosia, right down to the sprite Dixieland break (played live here and not added in the studio as with the original). Phish shows the lesser considered songs from the album the greatest care. "Don't Bogart That Joint" is given the famous Phish barbershop quartet treatment. "Apolitical Blues" and a nicely funked-up "Sailin' Shoes" bubble with lava ferocity and an extended "Feats Don't Fail Me Now" is rimmed with excitement and fun.