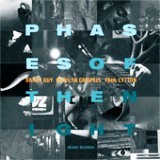 Any subversion of the piano trio tradition as manifested in the clinical virtuosity of a technocratic elite is always welcome, and it's present here in abundance. This is not however to suggest that this trio lacks technique, it's just that the music they produce is so free of the constraints of any overt tradition that the results are compelling.

Listeners need hear no further than the opening title track for evidence. Pianist Marilyn Crispell, bassist Barry Guy, and drummer Paul Lytton are razor-sharp in terms of how they listen and how they respond to what they hear, and whilst this is a program of Guy compositions the line between them and all-out improvisation is blurred to the point of non-existence. When a dark unison figure is articulated in unison by Crispell and Guy at around the seven and a half minute mark of the track, the result is as intrusive as it is stimulating, however, serving as it does to confound the listener's expectations.

By way of contrast "Insomnie" is music of gestures, the avoidance of anything as seemingly contrived as a theme coming from the very way in which the music evolves. Guy is all over the music here, his application of augmented technique allowing him to function as the epicenter around which Crispell and Lytton coalesce even as the music's taken at a fast tempo. There is however nothing frenetic about it. The relatively crude and indeed macho posturing of the blow-out has no role here, not when all three musicians are working so closely in realizing more rarefied ends.

"The Invisible Being Embraced" starts with a portentous Crispell playing solo but again expectations are confounded in the way the ensuing duet with Guy resolves itself. That in turn is usurped by some of the most torrential music of the entire program before a composed calm that's some distance from unmeasured is restored. The effect overall is of a deeply empathetic trio coming to terms with the moment with the aid of prepared material that's anything but inhibiting.

Phases Of The Night; Insomnie; The Invisible Being Embraced; With My Shadow.