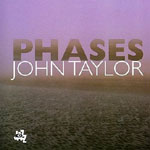 As much as he's become a major proponent of the piano trio tradition, John Taylor is gradually building a solo piano discography that may not be as voluminous or popularly acclaimed as those of Keith Jarrett's, but certainly bears comparison as much for its substantial differences as for any perceived similarities. While Taylor himself would cite Jarrett as being an influence alongside Bill Evans and Chick Corea, Phases further distances him from his roots, demonstrating ongoing growth from previous solo efforts Insight (Sketch, 2003) and Songs and Variations (Cam Jazz, 2005).

Jarrett largely approaches solo performance as a blank slate on which the music written comes from the ether; Taylor prefers, instead, to work generally with some kind of predefined form. While primarily a program of 12 new miniatures—only four tracks exceed five minutes—Taylor does look back at two compositions from his '70s trio Azimuth, on the dark-hued but dramatically intensifying "Eulogy," from The Touchstone (ECM, 1978) and even sparser "Autumn," from Départ (ECM, 1980). Both demonstrate the introspective viewpoint that's long been a Taylor signature, as well as an innately unorthodox lyricism. Taylor's melodies may not be singable, but they do sing.

Elsewhere, the classicism of the ultimately majestic "Prelude N. 3" prefaces the more haunting "Winter," Taylor's starkness invoking images of gray skies and bleak vistas. As much as he can be both harmonically dense and sophisticated, Taylor knows when to suggest more with less. And while his European approach is unmistakable, he gives clear hints of an underlying tradition, with the more open-ended middle section of "Winter" breaking into occasional briefly swinging passages before reverting back to its sparer cinematic landscape.

Taylor may lean to the introspective, but there's greater energy on the closing "Duetto"—one of two tracks to feature him overdubbing celesta over his piano. An oblique left-hand pattern creates a foundation for a fervent celesta melody that peaks with a series of dramatic block chords before picking up speed again for more improvisation and a gradual building of fever-pitched tension that ends on those same chords, played with diminishing power as the brief song ends. Taylor's soloing is unfettered yet curiously restrained; fiery passages come briefly when they do, yet there remains a feeling of sheer spontaneity throughout.

Despite not being about virtuosity, the depth of Taylor's playing makes clear that this is substantial music, played by an interpretive master who has gained major ground in the last decade. Stripped naked on the solo Passages, along with his recent trio discs with bassist Palle Danielsson and Martin France—notably the outstanding Angel of the Presence (Cam Jazz, 2006)—this disc should go a long way to cementing Taylor's reputation as the influential and globally significant pianist/composer he truly is.