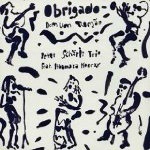 Obrigado Dom Um Romao is both a happy and sad accident. Percussion master Dom Um Romao was friends and played extensively with both Peter Scharli, one of Europe's most inventive composers and trumpeters, and Brazilian vocal powerhouse Ithamara Koorax. Romao introduced the other two, and the three began planning a performance tour together. Sadly, Romao died while these tour plans were still being made—"Manha De Carnival" is arranged around one of Romao's final recordings, on berimbau—so Scharli and Koorax recorded this tribute to their fallen companion instead.

Their renditions of the Brazilian folk song "Prenda Minha (Song #2)" and "Aos Pes da Cruz" were inspired by ones recorded by another trumpeter, Miles Davis, for his Gil Evans Quiet Nights (Columbia, 1962) sessions. Koorax shades her vocal in both tunes with brassy overtones that track so closely with Scharli's trumpet that it's extraordinarily difficult to distinguish between their two instruments. The more angular, be-boppish melody of "Two and One" incisively cuts then digs into its groove.

Scharli and Koorax also create an odd but eventually charming version of Cole Porter's "Love For Sale" by stretching out the first half of each verse over twice the number of bars, so that each second half seems to "snap back" elastically into standard time, while Scharli's trumpet solo yearns toward the soft romantic standard set for this tune by Chet Baker.

When her primary instrumental partner is a horn, does Koorax sing differently than she would if she was accompanied by, for example, piano? "I felt, more than ever, like a horn during the Obrigado sessions," she explained exclusively to AAJ. "Sometimes I really feel that there are two horns on the album, me and Peter's trumpet. In some tracks, like 'Estate' and 'Aos Pes da Cruz,' I tried to caress the tune like a flugelhorn player would do; on 'Aos Pes' and 'Song #2 / Prenda Minha,' I reproduced or quoted some of Miles' phrasing on Gil Evans' scores. I was very influenced not only by singers but also by trumpeters like Lew Soloff (in my teens I loved his work with Blood Sweat & Tears), Miles, Freddie Hubbard and, of course, Chet Baker. Trumpet is my favorite instrument! Not to mention that we decided to pay tribute to a drummer/percussionist without using drums or percussion!"

Koorax and Scharli proved to be sympathetic long even before this project. In 2004, each recorded "I Fall in Love Too Easily" without knowing about the other's version, and their new joint recording is the pinnacle of Obrigado. Koorax treasures each word as if it clutches her faith in romance, while Scharli's trumpet gracefully dances within the rhythms of guitarist Markus Stadler and double-bassist Thomas Durst. Koorax closes with a higher-than-high note that no words, no matter how well-written, could make you believe. Listen, and trust your own ears instead.

"The recording of 'I Fall in Love Too Easily' for the Autumn in NY CD (EMI-JSR, 2005) was a very spontaneous first-take, like most of the tracks on that album, which was recorded 'live in the studio'—I mean, I sang together with the musicians," said Ithamara. "Since then, I've been performing the song in live concerts very often. Peter had also recorded the song in another album before, 'cause it's one of his favorite ballads too. Then we decided to record it again, mixing elements from both of our live performances. The entire Obrigado album was cut live in the studio, so this second version is closer to how I use to sing it in the concerts, including that high note near the very ending."