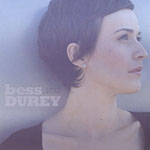 There is something ethereal about the Arctic Canadian sky—especially one that is visible in winter. Nothing can begin to describe the kind that can be seen on a clear night. The perfect way to communicate what it feels like is through a song. But to make this a metaphor for loneliness and loss, and describe it as "endless white," gives it a poetic twist and infuses it with layers of meaning. Then, to sing it in a narrow band of the upper registers of soprano—so high, so lonesome and so plaintive—makes the whole experience come alive; the flesh tingles and the spirit soars. It is a rare feeling, but then so is the prospect of Bess Durey's voice on the singer's debut, Arctic.

Her voice soars in the upper registers of a couple of octaves—soprano and elsewhere. This is a voice like few others, and Durey is a vocalist to whom pitch does not matter, because of the intrinsic lyricism of her voice and its gentle tremolo. And also because of the ease with which Durey can weave the words she writes into stories of exquisite meaning. Tunes like "Song for a Dreamer," "My Friend Rae" and "Dear Arthur" are good examples.

Durey is a lyricist first, and a vocalist second. This must be a conundrum for a musician. Abbey Lincoln and Sheila Jordan, for example, must face it every time they begin to sing. But this problem is wiped out when the first words of a song begin to sound. The voice becomes a wail, a clap of thunder, or an ululating flue of air. The story will be told with a gasp of breath, or a pause between words or lines of a song; whatever happens, eyes will moisten or stay dry as the experience becomes real, every time the song is heard.

Durey has a similar impact on the ear and the mind. The title track, "Arctic," is the epitome of everything that is ensconced in gentleness and mystery; and in the art of writing and singing a song. This is what makes a record such as this a rather brave adventure. No one can really predict how songs as seemingly personal and embedded with secret references and meanings as these will turn out. Beauty and perfection is always the expectation, but those are like rare and transient moments—so difficult to catch, but worth risking a life for.

This is exactly what Durey does on this record. She could not have asked for a group of musicians more sensitive to her feelings either. Pianist Amanda Tosoff is joined by guitarist Alvaro Rojas, who captures lyrical nuances offered by the singer and interprets them expertly; virtuoso bassist Andre Lachance; drummer Morgan Childs, who thinks like a vocalist; and the wonderful saxophonist Evan Arntzen, who is incomparable on "Leo Leo."

Durey ought to be proud of this fine debut record.

Softer Side; Product of Love; Song for a Dreamer; Artic; Somewhat Blues; Feel Alive; My Friend Rae; You Can Let Me Know; Dear Arthur; In This City; Leo Leo.