By Doug Collette
October 1, 2016
Sign in to view read count 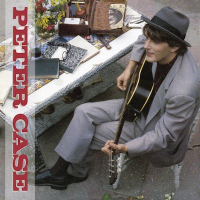 The music on Peter Case's debut solo album is as pure and straightforward as the title of this eponymous work. And that's even taking into account the layered approach T Bone Burnett applied in one of his earliest production jobs. The seven bonus tracks illustrate how both this original material of Case's stands strong on its own terms, especially in his authoritative performances, as a foundation for a brilliant all-around collaborative work.

Peter Case devotees as well as those unfamiliar with this splendid album might all do well to listen to the additional material prior to becoming immersed in the collection of twelve original cuts (and not just because the compelling nature might make it difficult to move on). Taking this approach, in fact, only cements an indisputably positive impression of the faultless logic of Peter Case: metaphorical pieces such as the opening one-two punch of "Echo Wars" and "Steel Strings" amplify short stories in song such as "Small Town Spree" because the artist's deliver is so forthright—let's remember he's the author of a book of prose memoirs As Far As You Can Get Without A Passport (Evermore Books, 2006)—and the arrangements so judiciously sprinkled with a detail proportionate to that in the song lyrics. Percussion, keyboards and electric guitar orbit around Case and his acoustic instrument.

In any discussion of roots authenticity, Case knows whereof he comes and not just from the punk and New Wave arenas of his former bands. There's a wry, knowing quality in his singing on Lightnin' Hopkins' "Icewater" and he, in collaboration with Burnett, make the Pogues' "Pair of Brown Eyes" sound like a traditional too and that's in part because, as with the chiming twelve-string guitar sounds supplied by The Byrds' Roger McGuinn on the latter cut, the corps of accompanists reflects the range of material and the versatility of production values; an esteemed composer and musician himself, John Hiatt appears here along with drummer Jim Keltner, who worked with three of The Beatles on their solo efforts, while Tom Petty's right-hand man, guitarist Mike Campbell, no doubt added more than just instrumental licks based on his history including work with Don Henley of the Eagles on work under his own name.

Two of the bonus tracks "Steel Strings" and "I Shook His Hand," derive from a promotional item issued on behalf of the 1986 album release and both reaffirm the emotional vigor Case himself brought to the sessions. Another pair of tracks have never been released at all before and validate the research done in preparation for this reissue as well as the wealth of ideas arising from the recording sessions proper: with "Horse & Crow" and "More Than Curious," Case, Burnett and the other participants go along way in creating a vivid mythology of their own on this album, not mention a palpable psychic space through the use of the stereo spectrum. The former exhibits all that and more while the latter is direct, but naturally poetic personal expression that belies the dated sound of sitar.

The coup de grace here (if it's possible to designate just one) consists of the inclusion of three numbers conjured up in that rarefied creative atmosphere that are seeing the light of day for the first time on this expanded title. "Trusted Friend" is a contemporary acoustic blues peter Case might well have written and addressed directly to T Bone Burnett. The taut emotionalism there is in direct contrast to the healthy detachment and good humor Case injects "North Coast Blues," which sounds like nothing so much as a solo recording designed as a demo. Terse and truncated a track as it is, there's a marked contrast with "Toughest Gang in Town," where the drum backing, counterpoint vocal harmonies and synthesizer touches maintain an antique recording quality (and it sounds like an alternate version of "Satellite Beach," at least melodically).

As with most of its releases, Omnivore Recordings touch all the bases with Peter Case. The original dozen tracks are remastered to resound with the depth Burnett intended. In the essay enclosed in the sixteen-page booklet within the digi-pak, the artist himself provides a vivid account of the creative epiphany that led to his marked departure from his work as a rock in the Nerves and the Plimsouls (and, in turn, why he still performs much of this material on his solo appearances). And the inclusion of the illuminating bonus material enhances the impact of the original release, which should be the fundamental purpose of any such archive title. There may indeed come a time when Peter Case is indeed seen as the godfather of Americana music and this package will go a long way toward supporting that perception.