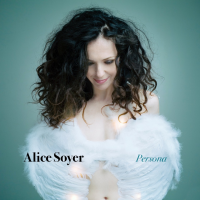 WARNING: Listening to this record may cause you to experience emotions, feelings, sentiments, passions, sensations, reactions, spirits, affections, sensibilities, and levels of warmth you have never felt before or that have been locked up inside you for far too long.

The irony of jest belies Alice Soyer's genuine voyage of depth and significance into humanity. Joined by soulmates and musicians Pascal Rey, Sylvain Luc, and Philippe Chayeb, Soyer bares her soul in order to enter your heart. Fifteen original Soyer compositions, that could be heard as a suite, are as richly sweet as the most decadent dessert. First recorded and followed by a subsequent low-key regional release over a decade ago, Persona's cathartic charm, musical and poetic substance, and heartfelt subtleties are now within our reach.

Soyer's voice is often heard as an instrument adding depth and character to the instrumental palette. Sung in French, many would need a translator to understand the words in the traditional sense. However, your imagination and listening skills are all you need to bring to the table to imbue and appreciate the many colors of Soyer's pallet.

The saga to your soul begins with an expanded exploration into a deep well. Luc's guitar lines create a contrast with Soyer's voice on "A la verticale." Again, heard as an instrument, Soyer's voice exudes an airy softness on her ballad "Ephemere." "Geste humain" is a standout piece of melodicism and grace. It may have a familiarity to it, as Bob James and David Sanborn requested and recorded this gem on their record Quartette Humaine (Sony Masterworks, 2013)

Etchings of sadness enter "la seule chose." It opens a window of wonder and why. Luc fires it up a notch on "Maintenent." His unique note selection and stylish presentation exquisitely stretch Soyer's range and boundaries. "Mirage" is uplifting in tone, yet quietly reflective. Soyer again graciously invites you into her precious world while Rey has an unobtrusive yet fruitful pocket presence.

The a cappella "Balance" has Soyer singing only to you and touching only your heart. Out of the lovely hypnotic trance, Luc and Rey are back to join in with Soyer's firm piano stride on "Rien." Her gait swings open a gate for Rey's voice to be heard. The beautiful and haunting melody "Oublie moi" follows. Luc makes judicious use of his superb note selections, melding with Soyer's embracing piano run. This song and the first track, "A la verticale," were also requested and recorded by Sanborn on Time and the River (Victor Entertainment, 2015)

Confronted by Rey's odd metered drum cadence, Soyer adventurously traverses down a less traveled and most inviting road on the title track "Persona." She encounters much in a short jaunt, including a welcoming Luc. Now sans Luc and Rey, Soyer, accompanied only by a children's metal xylophone, engages and wishes upon the stars as she rides the "Carrousel." "En vitine" is a melody that is so very beautiful in its simplicity. It rests quietly on Soyer's patient and understanding shoulders, as she soothingly tells us that everything will be okay.

Soyer is poetry in music. This is showcased and brought to life in subdued but glorious aplomb in "Melancolie." "Tout reinventer" evidences a certain Joni Mitchell quality, whether or not that was the intent. The record closes with an a cappella introduction that quickly darts into a snappy and harmonic contemporary piece. It also is the one song on the record that is sung in English.

Far from a typical jazz singer, Alice Soyer is an artist who knowingly draws parallels from an array of visions. A genre now as wide as the Grand Canyon, jazz is perhaps the only space large enough and with enough cerebral integrity for Soyer's voice to be truly heard and understood. With Persona, she takes flight and begins to spread her wings.