By Donald Elfman
March 1, 2006
Sign in to view read count 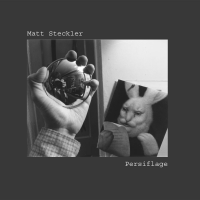 The dictionary defines "persiflage as "light bantering talk or "a frivolous style of treating a subject. Saxophonist/flutist Matt Steckler's compositional style can seem slangy and almost casual, but repeated listens reveal a depth of color, a true sense of shape, and a brilliant mix of the improvisational and the written.

For Persiflage Steckler has found players who know how to stretch the tradition as well as go beyond it. Jazz Passengers trombonist Curtis Fowlkes heads the front line with Steckler, and their sinewy and twisting lines never seem showy for novelty's sake. Instead, with the solid, yet ever adventurous pulse of more-than-rhythm players Michael Cain, Lonnie Plaxico and Pheeroan akLaff, the band plays themes that are both logical and completely surprising.

The tunes—all by Steckler—have the feel of the best George Russell ensembles, taking the modern jazz vocabulary and context for a much-needed ride. The opening "March Nor'easter, for example, is jaunty and playful but digs into a groove that keeps it in the pulse. Steckler squawks on alto and Fowlkes bellows and brays—all over rich sounds from Cain and a powerful AkLaff—but the tune keeps you snapping your fingers, even as you can't quite figure out where it's going to go.

Later the group does a nutty take on a Latin groove—"Episodio pa' Osmany —spinning it out into some other world, one where the digging is down and deep but also headed into new territory. All the tunes have a feel that we've come to know from listening to jazz records, but none of them feels tired or rehashed.