Home » Jazz Articles » Perico Sambeat: More Than He Could Imagine

Advertise
6
Catching Up With 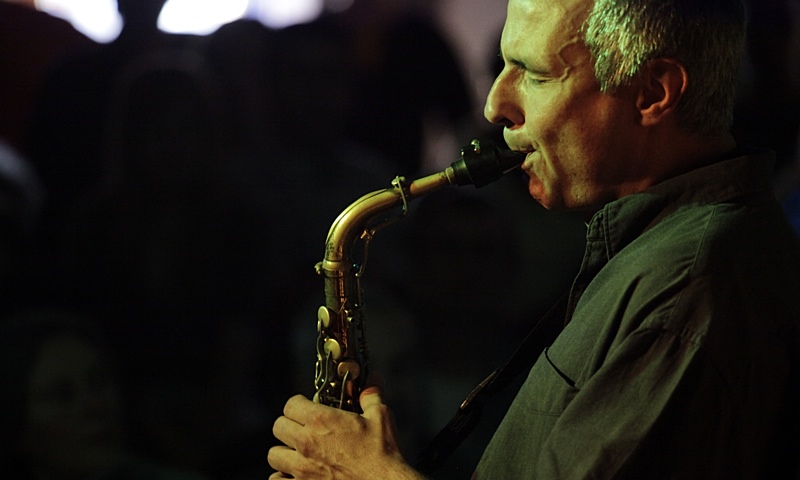 I have always considered myself a saxophone player, not as much as a composer or a bandleader.

Perico Sambeat is one of the most famous Spanish sax players around the world. Before he got special recognition in 2003 when he won the Bird award at the North Sea Jazz Festival, he had been working internationally for more than twenty years. This eclectic jazz musician has a rich discography both as a leader and as a sideman which includes different styles, from the straight ahead to Latin, hip hop or flamenco-jazz.

This lively mind is always working in new personal projects. Last July he produced a tribute to Duke Ellington by directing more than one hundred artists who performed a complete selection of the Sacred Concerts at the Valencia Jazz Festival, and few months ago he worked hard on the memory of Charles Mingus by transcribing the tunes from the album The Black Saint and the Sinner Lady (Impulse!, 1963) for an exclusive concert with a select ensemble at the emblematic Jimmy Glass Jazz Bar.

Perico Sambeat is very much in demand these days by various big bands and bandleaders around Europe; because of that is quite hard to find him in Valencia, his hometown.

All About Jazz: You have been touring a lot lately. In which projects are you involved?

Perico Sambeat:This year I have a lot of projects as a sideman, all around Europe mainly. I play a lot with steady big bands, especially with what are called radio big bands, they they receive assistance from the government. Usually I go there two or three days before the gig to have the rehearsals with the band. I have had many of these concerts since October, the next one is Frankfurt, I'll go there to play my Flamenco Big Band concert. I tour a lot, I don't complain. I am very lucky. [Smiles]

AAJ: With which big bands have you played?

PS: I played in Finland with UMO Big Band. That's an historic big band in Europe. They asked me to go to Pori Jazz Festival in July but I don't think it's confirmed yet. And I was also in Brussels, Brussels Big Band is amazing!

AAJ: Are you preparing something with any smaller formations?

PS: Well, I have workshop in London and a gig there with the great singer René Marie. And also I'm going to make a new recording with CMS Trio, with the bassist Javier Colina and the drummer Marc Miralta .

AAJ: CMS is the best trio project in Spain, and people are expecting your new album. When will you record it?

PS: I guess it will be in June. We'll have a week of gigs at Café Central Madrid and then we'll go to the studio with new original material, we are all working on it.

AAJ: And are you running on a new big band project as well?

PS: Yes, my next record as a bandleader will be a big band record, but not flamenco. I am working on it. It will come out in 2014. It won't be straight ahead and flamenco either. I am composing the tunes. [Smiles]

AAJ: Your Flamenco Big Band (Verve, 2008) is the album which has opened the most doors for you.

PS: Yes! I am surprised with that project because it gave me a lot of joy. It was hard work, but after that, wow! It has taken me to more places than any project in my life. I have played with the most important big bands in Europe. I have received calls from some big bands in the States, but it's really hard to put it together, and also some people are working on it even in Japan. So I am amazed.

AAJ: You sound surprised when you talk about your acknowledgement as a big band director, why?

PS: I have always considered myself a saxophone player, not as much as a composer or a bandleader. So it's surprising how after years I get more calls as a big band director than any other. And of course, I get calls as a saxophonist, and I play a lot but this writing and directing have become something very important in my life. And that surprises me because I never would have thought about that twenty years ago, no way. [Smiles] I love it, I have a lot of fun!

AAJ: But after all this work don't you consider yourself as a composer yet?

PS: Well, maybe now I should! I have done so much, but it's something I wouldn't have imagined when I began many years ago. You know, I think I have a natural talent, a kind of ease, to play saxophone, even though I have practiced a lot. But it comes like something natural, fluent. But that's not the case with the writing. My writing task is hard, hard as hell! It takes me so long to write with so much effort.

AAJ: Did you get good results with your latest album, Ellastic (Contrabaix/Karonte, 2012)?

PS: Ellastic is the last record I did. It is a little bit different to the rest of the records I have done, maybe more electric. I am very happy with it. I worked with great musicians like the drummer Jeff Ballard, the pianist Eric Legnini, the bassist Thomas Bramerie, and the guitarist André Fernandes. The last gig we did was in Porto last November. Ballard couldn't come and Marc Miralta did it instead. We don't have many gigs with that project because it is very hard for these musicians to meet together, they are always very busy as they are very famous.

AAJ: You combine your busy agenda as a musician with your teaching.

PS: Yes, I am teaching in Berklee Valencia. I have fun with my students. I am teaching students from Master Degrees, so they already play and that's very nice. I teach performance and improvising lessons and I have two Collectives, one is an ensemble of Mediterranean music. There is a lot to learn about that, I think I learn more than any one of them. I pick up tunes and rhythms from this marvelous area and I try to play in the original vibe and then I open sections with solos to bring them into my world. There are so many interesting rhythms and melodies in the North of Africa, and we also play some music from the Balkans and Greece, they are so polyrhythmic. I also had another Collective class called Topics and Improvisation, we started chronologically from the very beginning with Louis Armstrong and in each class we transcribe, analyze and play the style we are studying.

AAJ: How do you feel about the Spanish jazz scene?

PS: There is a huge economic crisis, so there is not too much work here and that's a pity because we have really good young musicians who come from our music schools. You can see that they are very well-prepared and talented people, more and more! There are so many great young jazz musicians with no places to play. I remember a few years ago that I could talk with my colleagues and tell them that there was a young guy in Huelva that played great and it was like "What? That's unbelievable!" and now it's completely normal! There are great players all around here, and that's marvelous but it's a big pity that there is nowhere to play and that the few festivals died, like Madrid... Yes, Madrid Jazz Festival died.

AAJ: One of the greatest jazz schools in Spain is Sedajazz, with which you have an affectionate relationship.

PS: Yes, Sedajazz is a project that has been on for more than twenty years in my hometown, Valencia. It has put together some of the best musicians around for years and years, and it has been doing great musical projects: from big bands to small formations. But without a doubt, its main goal has been teaching. Francisco Blanco "Latino," Sedajazz' Musical Director, is the man who made this possible. He's a man who has done a lot for the jazz scene in this city and this country. He also runs a great annual Seminary, one of the most important jazz events in here. Nowadays I think he means a lot for Spanish jazz.

AAJ: What do you hope for the future?

PS: I am very lucky, I am living what I always dreamed, which is being able to make a living from music with no commercial pressures. I am doing well: playing music, writing, meeting new people, getting recognized... So I would ask of the future for it to be as nice with me as it has been up until now. Not to change. [Smiles]