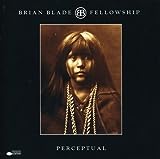 Far from your typical young jazz artist, drummer Brian Blade seems almost bent on avoiding classification. He's been found in the studio and/or on the road with such disparate employers as Joshua Redman, Bob Dylan, Seal, and Joni Mitchell. With technical prowess of obvious proportions, Blade is equally reticent about flashy drum displays, content to merely color and prod the composition at hand. All of this is as much apparent in his sideman stints as it is with his two Blue Note dates as a leader, Perceptual being the latest offering by his collective known as The Brian Blade Fellowship.

A more varied and ultimately satisfying affair than the group's 1998 debut, Perceptual is still nonetheless a dark and brooding journey that has as its underlying theme society's current lack of humanity and value for young lives, keyboardist Jon Cowherd's "Reconciliation" being directly influenced by the shootings in Paducah, Kentucky. Much of what comprises this hour-long recital is of a restrained and pensive nature and those hoping for lengthy drum solos and the typical "burn-out" type of improvisations will have to look elsewhere. In fact, very little of the material here swings in the conventional sense, save for sections of "Steadfast" and the 5/4 lilt of "Crooked Creek."

The one new addition to this group since the last record is that of guitarist Kurt Rosenwinkel and it's a curious one. I say this in consideration of the clear association between the spirit of this set and that of Rosenwinkel's own recent The Enemies of Energy. Stretching the comparisons even further, the Nordic strains of Jan Garbarek's musical personality (not to mention an overall chamber- like quality akin to the ECM mantra) are more than hinted at during the lengthy suite, "Variations of a Bloodline." All of this is not to suggest mere rote regurgitation on Blade's part, but to provide point of reference for the uninitiated.

In the final analysis, Perceptual is a very likable and intoxicating brew that benefits from a collective sound that finds no one person in particular dominating the proceedings. The key will be for Blade, Rosenwinkel, and other purveyors of these latest musical developments to make sure they don't run aground much in the same way that the renaissance fostered by Marsalis and his ilk during the '80 led to many dead-end roads.