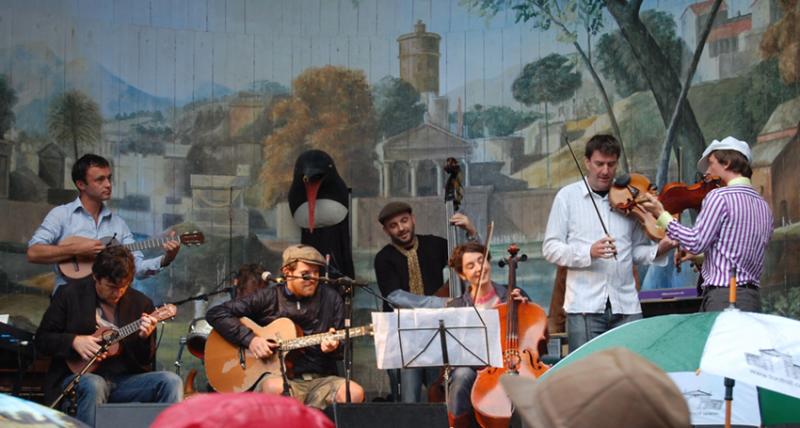 Penguin Café occupies a unique place in the universe: a comforting and welcoming place where English eccentricity mingles happily with musics from the four corners of the Earth...and one or two other places, too. When the 10-piece group performed at Snape Maltings, with its own slightly eccentric setting in the Suffolk countryside, the illusion was heightened and the resulting atmosphere readily transported the audience to an unreal but rather desirable musical world.

Penguin Café took the stage to appreciative applause from a packed house. The musicians were dressed, for the most part, in the sort of casual attire that would be ideal for an Edwardian country picnic—violinist Darren Berry's natty white ensemble gave him the look of a rakish village Squire. With the exception of an electric guitar, the Penguin Café's instrumentation was acoustic: assorted percussion, harmonium, piano, whistles, viola, cello and ukulele, among others, with most of the band members moving happily between instruments over the course of the night. Combining this varied instrumental lineup with the distinctive compositional styles of Simon and Arthur Jeffes, Penguin Café created an instantly recognizable sound.

The performance started with "Dirt," a tune with a strong Americana feel thanks to Arthur's electric guitar part. "Swing The Cat," rooted in Irish folk, was the most up-tempo of the night's tunes, although it never quite managed to gain the momentum that its early stages promised. Arthur's own compositions, taken from the self-produced Penguin Café debut, A Matter Of Life (2011), were impressive. Arthur played the gentle solo piano piece, "Harry Piers," a tribute to Simon, as the first encore. "From A Blue Temple"—based, Arthur explained, on the Fibonacci Sequence—was intriguing, while the melancholy "That, Not That" and the gently insistent "Landau" were both beautiful.

It was the Penguin Café Orchestra's best-known tunes that received the warmest responses of the night. "Music For A Found Harmonium" (which Simon composed on a harmonium he found in the streets of Kyoto, Japan), "Perpetuum Mobile" and "Telephone and Rubber Band" are old friends, tunes that seem part of an ancient English musical tradition even though none are more than 40 years old. "Telephone and Rubber Band" featured the most obvious use of contemporary technology, when Arthur used his mobile phone to play a sample of the original analog telephone ring tones that formed the tune's rhythmic foundation.

Forty years after Simon Jeffes established the Penguin Café Orchestra, the music still sounds original and strange. Arthur's decision to form Penguin Café, and to extend the repertoire, is to be welcomed. This was a great concert—a talented band, playing genuinely original music with enthusiasm and warmth.