By DAN MCCLENAGHAN
October 14, 2017
Sign in to view read count 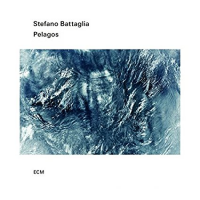 Italian pianist Stefano Battaglia, an ECM artist since 2005, is a player possessed of an alluring refinement and polish carried over into his jazz work via his classical training. His best recordings, 2015's In the Morning (ECM Records) and River Of Anyder (ECM Records, 2011), are studies intricate and understated beauty. Both are piano trio outings—a format that suits Battaglia's approach, as does going it alone, his mode on Pelagos.

Pelagos is Battaglia's journey into solo piano, enhanced at times with prepared piano interludes. The subtle shading of the prepared piano adds a timbral layer to the sound, on a music that exudes an enchanting  simplicity/complexity dynamic. Battaglia's compositions beguile with a mystical quality, here and throughout his discography. His improvisations—slightly more than half the tunes here—exhibit the same quality, and it's doubtful that, without a scorecard, the composed and the improvised could be identified as such.

The prepared piano sounds, found on about half the pieces, ring with a slightly metallic rigidity, softened by the gentle fluidity of the acoustic piano. They play together well.

The only non-original on the set, the Arabic tradition tune, "Lama Bada Yatathanna," is presented twice, once per disc of this two CD set. Both are lovely, lilting, magical renditions.

The music on Pelagos reveals an extended meditation of migration. It evokes feelings of sense of wandering, of rootlessness, somber-but-accepting notions of having no direction home, with hopeful undertones.