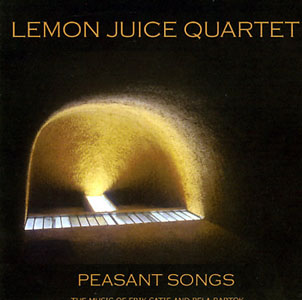 The Lemon Juice Quartet has serious eclecticism. The term which is not found in most dictionaries is used to describe music that uniquely and successfully displays profound elements of eclecticism and electricity. Peasant Songs continues to show that the borders of jazz are global and that it’s roots will continue to thrive in the hands of musicians with vision.

LJQ is a New York-based jazz quartet founded in 1993 with member roots in Israel. Original members Eyal Maoz on guitar and Shanir Ezra Blumenkranz on bass, have seen a few band member changes, but now have a musical core with the addition of Avishai Cohen on trumpet and drummer Kevin Zubek, whom they met at the Berkley College of Music.

The group creates music with a unique fusion of jazz and traditional homeland music, that is both dynamic in its creativity and sound. Hot in the downtown New York jazz scene, they are regulars at the popular Knitting Factory and other area music venues. The quartet has performed at numerous "Radical Jewish Culture" events, including Jewsapalooza, and also at the “ Red Sea International Jazz Festival” in Israel. With a open mentality to musical diversity, they have a global view and contemporary ear for many facets of today’s music. Their new release, Peasant Songs embodies the very essence of their diverseness.

Peasant Songs features music by French composer Erik Satie and Hungarian composer Bela Bartok. The music is reconstructed into a melting pot of other influences such as free jazz, avant-garde, experimental, funk, Jewish folk music, and many other ingredients. The culmination of these many flavors creates a most interesting musical gumbo. With quirky arrangements and odd tempos and rhythms, the music is never sedate. The lead instruments of trumpeter Avishai Cohen and guitarist Eyal Maoz provide fluid and fiery solos, but it’s the precision rhythm machinations of bassist Shanir Blumenkranz and drummer Kevin Zubek that hold it all together. A few of the many highlights include the ultra-hip “Sports and Leisure” which should be a candidate for one of the ‘Funkiest Cuts of the Year” and the solemn composition “On a Lantern”, with its outstanding trumpet work by Cohen and some really weird and wonderful guitar sounds by Maoz. Highly recommended.