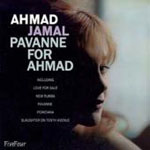 Some of Ahmad Jamal's detractors over the years have expressed the opinion that his music belongs as much in a cocktail lounge as in a jazz club. The fact of the matter has perhaps always been that he's got no closer to that dubious location than Errol Garner did, and this collection of his sides from the early to mid-1950s is abundant testimony to just how fertile his musical imagination can be. It also offers a kind of alternative blueprint for the piano/guitar/bass trio compared to those led by Oscar Peterson. Here the music is more democratic and less subject to the whim of an overbearing leader—and it's all the better for that.

The infectious joy this trio generates is also of a superior order, as the two and a half minutes of "A Gal In Calico exemplifies. Here, as elsewhere, guitarist Ray Crawford acts as a kind of percussionist by performing extreme dampening of his strings and using the body of his instrument as a hand drum.

A variety of approaches also play a part in the success of this group's music. The Gershwins' "A Foggy Day is given the kind of wistful reading for which it could have been written; Crawford makes the melody tell, as opposed to the leader. On the infrequent occasions when the group does stretch out, the results are more than rewarding. Jamal's admirable sense of economy is evident on "I Get A Kick Out Of You, where he just might come on like an amalgam of Peterson and Lennie Tristano, albeit without the former's weakness for overstatement.

Kudos are also due to bassist Israel Crosby, who plays on the majority of this set. His work throughout is that of a master, with the term here implying a musician more than capable of supplying both a rock solid foundation and supplementing the essentially buoyant nature of Jamal's work.

A kind of arbitrary but pertinent test that can be applied to music like this is whether or not it transcends the listener's own prejudices with regards to individual instruments or instrumental lineups. In this instance the music comes through with flags waving in both cases, and I'm left rueing the fact that it's taken me so long to catch up with Mister Jamal.

The Surrey With The Fringe On Top; Ahmad