Paul Wertico: All In A Day's Work

By CICILY JANUS
December 14, 2009
Sign in to view read count
Seven-time Grammy winner Paul Wertico, a name long-synonymous with innovation and Herculean energy/talent in the world of drums, has stepped out of the box once again to present an album that defies genre boundaries. In addition to the usual suspects of his trio including guitarist John Moulder and bassist Brian Peters, Wertico has combined forces with Israeli guitarist Dani Rabin and saxophonist Danny Markovitch to form the Mid East/Mid West Alliance. The product of this marriage of talent recently came together at Studiomedia Recording Studio in Evanston, IL, where, after two short evenings of transcendental artistry, Impressions of a City (Chicago Sessions, 2009) was born.

With the help of Nick Eipers, master engineer and owner of Chicago Sessions, this recording rises above even Wertico's high artistic standards. This team has created a dreamscape that combines experience with differing definitions of mood, daily life and emotional maturation. Their strengths and talents allure from track-to-track. This collective and wholly improvisatory vision manifests itself as a soundtrack for the weary ear, offering a different perspective of what music is and what it can be. There are large servings of ear candy for the soul. A beast lurks deep beneath the musicians thoughts whereas, in other moments, there are tinges of beauty that speak as a siren would, calling out to the vulnerable lives within their sounding range. Tearing through this Babylon of sound, Wertico's impeccable ability to marry artistic dreams with talent are alarmingly in tune and have provided, yet again, a new standard bearer for music and the shape of it to come.

All About Jazz: This recording is quite unique...not like a jazz album at all. Can you tell us the story behind the formation of the Mid East/Mid West Alliance?

Paul Wertico: The story behind this is as intriguing as the record is. I've had my trio since the '90s. It's basically been John Moulder, who is one of my best friends and an incredible guitarist. I've played with him since the early '90s when I played on his first CD, Awakening. Then there's Brian Peters, who I met a few years ago when I recorded my CD, StereoNucleosis. He's this young genius. He plays, or at least it seems like it, just about every instrument imaginable, and also does fantastic engineering, mixing and a lot more. The three of us have been playing together for about five years.

Then one day out of the blue, I heard from a guitarist named Dani Rabin, who had just moved to Chicago with his saxophonist friend, Danny Markovitch. They're both from Israel and moved here recently from Boston. They said they got my name from Jamey Haddad, the great percussionist who plays with Paul Simon and Paul Winter and teaches at Berklee [College of Music, in Boston]. They asked me if I wanted to hear them play, so I could give them my opinion of their music. I said sure, and wrote down a date for them to come over to my house, but I must have forgotten about it. They showed up at my door one night while my family and I were having dinner and they had tons of amps, pedals and other equipment...I thought, "Oh no." But once they got set up and began to play...it was incredible. I couldn't believe how great they were, they sounded like an ECM record!

After hearing them I thought they would be a wonderful addition to my trio. They were exactly what I had been waiting for. My wife and I hired them, along with John and Brian, to play for my daughter's Bat Mitzvah. Both Danny and Dani know a lot about Israeli music. During the luncheon after the service, the four of them began playing and as I listened to them, I knew that I had found the perfect combination of players.

Once I knew we were going to play together as a band, I realized we had two guys from the Middle East and three guys from the Midwest...so that's when I came up with the Mid-East/Mid-West Alliance idea.

AAJ: Chicago Sessions is not a well known label...yet. Why did you go with them as opposed to someone better known for this album? 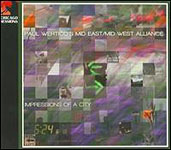 PW: Nick Eipers, who runs Chicago Sessions, talked to me while I was playing with Larry Coryell at the Jazz Showcase in December 2008. This was after I had already met Dani and Danny. He asked if I wanted to be on his label. I wasn't sure how I felt about it at that time, so I didn't say yes or no, I kept my options open. In the interim, I heard from Nick a few more times and then he told me that the label was only looking for original music. I knew it was going to be a perfect match from that point.

I'm really glad we went with Nick and Chicago Sessions because so often a label can ruin a project by wanting to have too much control over it. But Nick just let us do whatever we wanted to do. He didn't run any interference. The album wouldn't have been the same if he had done that. Instead it turned out just as I had imagined it would.

Although Nick is a wonderful engineer, we decided to edit the record down ourselves. We gave it to him as a finished product so he could master it. At first I was worried. I didn't tell him we were going to edit it and mix it because I wanted control over it and plus I didn't know Nick all that well yet. I didn't know if he'd be game. I did know though, that his records sounded great, but it's hard when you have all these unnamed improvised pieces on a recording that are interspersed. You can't just tell someone on the phone what you're looking for. But when we gave it to Nick after Brian mixed it, he was thrilled with the results. Then I was really glad we went with him and his label. It wouldn't have been the same with some other labels.

AAJ: How is this album different than others you've recorded as a leader and as a sideman in the past?

PW: I thought to myself that if we're going to do this, we're all going to come in and just improvise. There's not going to be any tunes or anything written out. But I just knew it was going to be great. I wanted to take that chance. In fact, we didn't even play together until that first night of the recording. We set up in the studio, ate some food, and began to play and it was unbelievable. It's basically a free album. I suggested moods and things that I thought would round out the album, then somebody would start and we would join in. There were no overdubs. Everything's totally live, so all those complex sounds going on at once were recorded in real time.

At one point during the recording I knew it was all just meant to be. Dani had all these unusual things going on with his guitar parts. He said he usually had a little tin cup full of marbles that he put on his strings, but for some reason he didn't have any marbles with him. But right next door to the studio was a craft store! I knew they were closing in five minutes...we quickly ran next door and asked if they had any marbles and they pointed to this huge wall that had marbles of every size. We just started laughing!

The whole recording was so natural. We just kept playing and we actually could have finished mid-way through the second night, because we already had enough material for a couple of CDs, but we kept playing anyway. Nick was totally cool with it since the studio was booked for a certain amount of hours anyway. Plus, we were having so much fun.

AAJ: How did you come up with the title: Impressions of a City?

PW: I'm the Head of Jazz and Contemporary Music Studies at Chicago College of Performing Arts at Roosevelt University in downtown Chicago, so I'm in the city all the time. When you're in the city, you hear sirens and noise constantly. When we were playing, I was thinking that this is what the music sounded like. There were so many things going on. All kinds of wild sounds and textures were happening. With all of this, I thought it sounded like the city. So when I needed a title for the CD, I thought I'd call it Impressions of a City. After I figured out the CD's title, I came up with tune titles that describe a day in the life of someone in the city.

During two of the tunes Dani Rabin had a radio on with the local traffic report. He manipulated it with effects and it fit perfectly with the music. But then we had to get licensing permission to use it, so we had to try to figure out what station, and what program, we were listening to at that time. We then figured it out by the recording logs. We finally got permission to use the broadcasts but there were also some legal restrictions. We said forget it. So Brian wrote his own traffic reports and went through the same effects processing by doing it on his own. I guess that's the only thing that's "not live" on the record.

Then Nick stepped up to do the cover art. Usually, on his label, there's a drawing of the leader's instrument on the cover. We didn't want that. Nick then put a collage together of photos he took and drawings that went with impressions of the city. He was a bit nervous that I wasn't going to like it, but I thought it was fantastic. I credited him as the executive producer of the album because of all of this.

AAJ: Can you explain the difference between an executive producer and a producer for an album? 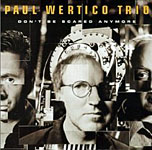 PW: Usually an executive producer is basically the person with the money. Sometimes, it's someone who puts up money but also oversees the process. There are different degrees of producers who put their name on things. Some hire all the musicians, some arrange, some compose. I knew that this was my artistic vision and I put the concept together, but Nick did so much and was just so great in general, that I took credit as producer and he's listed as executive producer.