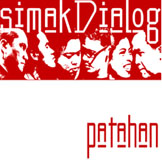 Starting out closer to smooth jazz territory, Indonesian simakDialog ("to listen carefully to The Dialog) has come a long way since 1993 to get to Patahan, its first release to see international distribution. Based on the album's episodic and expansive opener, "One Has to Be, first impressions would suggest this Jakarta-based quintet is mining similar turf as the equally complex-yet-accessible Pat Metheny Group. But with two ethnic percussionists taking the place of kit drums, while the influence is indisputable, simakDialog has more than enough to define its own voice.

Keyboardist/founder Riza Arshad is the sole musical composer on this live album, recorded in the spring of 2005 in Jakarta. Like the Pat Metheny Group but inverted, the primary voices here are Arshad and guitarist Tohpati Ario Hutomo ("Tohpati ) who, armed with a similar arsenal of acoustic, electric and synth guitars, could easily be considered simakDialog's Metheny to Arshad's Lyle Mays. Bassist Adhitya Pratama ("Adhitya ), like Metheny's Steve Rodby, rarely gets the spotlight, but his rich fretless tone anchors this group the same way: he may not dominate, but his absence would be sorely felt.

Rather than looking at how simakDialog resembles the Pat Metheny Group, it's perhaps better to examine how it differs. Tohpati, while capable of clean dexterity, demonstrates considerably more edge—both in his tone and melodic approach. Even his guitar synth tone is grittier. There's a jazz vernacular, but tempered with a rock attitude that makes his solos on the fiery "Spur of the Moment and more brooding "Kemaran highlights of the nearly 75-minute set. Arshad, an impressive pianist, uses his synthesizer sparingly and to great effect, but more for color: like Mays, his dominant voice is the piano. The two percussionists—Endang Ramdan and Emy Tata—provide plenty of forward motion, but with the emphasis on two different sizes of kendang hand drum, it's a more low-end alternative to the Pat Metheny Group's cymbal-driven pulse.

Singer Nyak Ina Raseuki ("Ubiet ) guests on the wordless vocals of "Spur of the Moment and the lyric-driven "Kain Sigli, which also incorporates poetry in both German and Bahasan Indonesion, courtesy of Marla Stukenberg and Tata respectively. It's on this track that the Asian aspect of simakDialog's cross-cultural mélange is at its strongest.

Throughout Patahan, however, the appealing and unequivocally contemporary jazz lyricism of Arshad's writing is informed by an Asian exoticism that, at times, is more linear than changes-based. It's the way that Tohpati and Arshad solo, with a language familiar to American listeners but over bass ostinati and complex, dual percussion-driven rhythms, that makes simakDialog and Patahan, if not technically a debut, a brilliant first salvo to audiences distanced from the Pacific Rim.

One Has to Be; Spur of the Moment; Kemarau; Worthseeing; Kain Sigli.