BY NENAD GEORGIEVSKI
October 9, 2011
Sign in to view read count 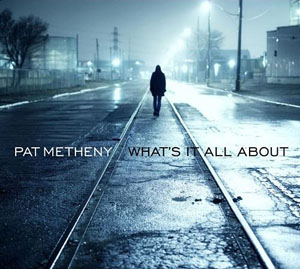 What's It All About

On first listen, this is an interesting record, on second, a great record, and on third and onward, What's It All About is an essential record. Recorded in the same manner as guitarist Pat Metheny's previous solo outing, One Quiet Night, (Nonesuch, 2003), Metheny sat one night with his acoustic guitars and made this wonderful offering.

As a genre, jazz has always been both an interpretive and a creative form. It is in its nature to encourage musicians to approach music and its various forms in different ways and to come up with something new, different and fresh. Its history is full of examples of musos covering and reinterpreting music beyond the jazz legacy, and in recent times the world of pop and rock music has proven to be a great source of songs to interpret. That is the best case scenario.

The worst case scenario is that, in recent times, cover records have proven to be a favorite playground for all kinds of people. Most of them, as judged by the end results, are pointless, clueless and horrendous. It is rare to find people taking a fresh approach to familiar tunes, making the songs, for the moment, distinctly their own. Metheny, like any other great jazz artist, is no stranger to covering tunes and they always sound like one of his own compositions. Regardless if he has a band behind him or just his guitar, he reworks those tunes in such a manner that the sun shines when he touches a string on the guitar.

On this record, armed only with his acoustic guitars, it sounds like he is a one man band as he masterfully plays melodies and fills out the sound picture with subtle nuances. Metheny has approached these songs with utmost care, and it sounds like a gentle outpouring of beautiful music that makes you listen from start to finish without noticing the passing of time. By the time you hear the first tones of his guitar, Metheny has revealed his modus operandi: late night and gentle covers of relatively popular songs and film themes. Although without the prevailing solitary tone of the aforementioned One Quiet Night, it still is a hushed and intimate affair.

The mood is pastoral and folkish, and Metheny adds a certain gleam to these tunes. Rather than choosing to replicate, he looks under the bonnet of each selection to see what makes it go and then takes it for a spin. An example of that is the opening track, "The Sound of Silence," where from the recognizable opening notes of this Simon and Garfunkel classic, with the use of the Pikasso 42 string guitar, the song turns into something different, with a distinct dreamy feel and unearthly serenity.

As always, Metheny's guitar playing is light as air and it suggests a formidable aesthetic at work, rendering softness with expert precision. He reworks these tunes with a distinct approach that is flexible enough to reinterpret them without destroying the past associated with them. The follow up, "Cherish," although it has been covered countless times, including by Nina Simone, whose version is the winning one, it sounds as if Metheny kind of took her approach to heart—she seems to be singing through his notes.

By leaving pauses and breaths in right places, Metheny gives a hint of a play of color and light with a comfortable melancholy. "Rainy Days and Mondays" and "Alfie" are great examples of the subliminally sensual, of which he is a master. This beautiful set of covers ends beautifully with the Beatles' classic "And I Love Her" and this interpretation again is full of surprising creativity.

As always, Metheny impresses more with subtlety and melodic logic than with firecrackers. In the end, he has made a record that can lure the listener into emotional spaces that enchant, seduce and delight.

Tracks: The Sound of Silence; Cherish; Alfie; Pipeline; Garota de Ipanema; Rainy Days and Mondays; That's the Way I've Always Heard It Should Be; Slow Hot Wind; Betcha By Golly, Wow; And I Love Her.