By JOHN KELMAN
September 11, 2015
Sign in to view read count 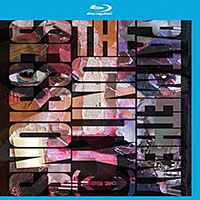 Instead of recording live in front of an appreciative and enthusiastic audience, for The Orchestrion Project—given the inherent challenges of having the number of cameras required to truly capture the guitarist's solo project with his unwieldy but impressive pneumatic and solenoid-triggered, analogue instrument-constructed but still MIDI-driven Orchestrion—Metheny went into a performance space immediately after the completion of his solo world tour in support of the original 2010 studio album Orchestrion (Nonesuch), and recorded what was essentially his live set, but with more control over the environment so that he could produce a document that quite literally (especially with the 3D version of the Blu Ray) put his fans onstage with him.

It was a terrific move under the circumstances; after all, playing with preprogrammed Orchestrion tracks and loops that he'd build with frightening real-time complexity, it wasn't about human interaction; and so, while The Orchestrion Project may have lacked that spark which comes from playing in front of a live audience, the visuals— Metheny's ability to document the Orchestrion from angles that would have been impossible in a real performance, where so many cameras would have intruded on the audience experience— made The Orchestrion Project more a studio recording of a live set than an actual live performance, and was, consequently, an unmitigated success for what it was.

But is such an approach appropriate when documenting live performances played by a real band with real people? Does such an approach lose out on the inspiration provided by a real audience? These are two significant questions with The Unity Sessions, a Blu Ray or DVD that documents the majority of material from live sets performed on the 2014 world tour undertaken by Metheny's recent project, which began as the hard-blowing four-piece unit heard on Unity Band (Nonesuch, 2012), and expanded into the quintet of Unity Group that, after releasing the more cinematically composed but still improv heavy Kin (<—>) (Nonesuch, 2013), crossed the globe from Stavanger, Norway to Ottawa, Canada over the course of more than six months.

As Metheny would say in his band introductions on this tour, Unity Group was really two bands, and the quintet that toured in 2014 with the addition of "utility musician" and multi- instrumentalist Giulio Carmassi wouldn't have happened had the original quartet—featuring powerhouse saxophonist Chris Potter, rising star bassist Ben Williams and longtime Metheny über-drummer Antonio Sanchez—not toured the world on the back of Unity Band in 2012 and had so much fun doing so; so much fun, in fact, that Metheny felt the need to keep it going, but in a form that took the less detailed, more improv-centric music of the first album and added new writing for the second that was far more complex and long form in nature...in addition to making the Orchestrion a key sixth member of the band.

Taking the same approach as The Orchestrion Project made it possible to record a live Unity Group set with the luxury of multiple camera angles that simply would not have been possible in a live concert setting, as well as providing the opportunity to fix any potential gaffs that might occur and, by having the freedom to do multiple takes, obtain the ones with which everyone was happy. The result? The Unity Sessions is a more immersive (and perfect) experience...making it no doubt that there is value in this approach.

Metheny has admitted, for many years, that when he knows he is being recorded he goes into a kind of "record mode," which changes how he plays and, to some, extent, discourages him from taking the same kind of risks he takes when he is playing without the knowledge of being permanently documented. It's a sad reality of today's concert-going experience, however, that—and despite requests and even admonishments from venues and performers not to record concerts on smartphones and tablets—there remain those who, nevertheless, mar shows by seeming unable or, worse, unwilling to comply. The consequence is that artists like Metheny find themselves in the position of no longer having control over the recording and distribution of their own music. And, all too often, it's those who proclaim themselves to be the artists' biggest fans who are the biggest culprits. How fans can profess to be such strong supporters of an artist's work while, at the same time, ripping control over their work from them is now a baffling reality. Metheny has even issued a YouTube video on the subject, which you can find under the "Videos" tab in the "Pat Metheny Related" box at the bottom of the page)

So, given that harsh reality of today's concert experience, Metheny has been faced with the alternative of making concert recordings the old fashioned way, warts and all—but also having fans record and post performances to Youtube that may not be what he and his band mates consider to be their best—or taking total control over documenting the concert experience à la The Orchestrion Project, rather than recording in a context almost certain to be marred by the invasive nature of audience recordings. By taking his group into a controlled environment, in addition to capitalizing on the greater opportunities made possible by capturing the visuals with more cameras placed in positions not possible during a "real" live show, there is also a greater certainty that the performance will be one that the group is happy to have permanently documented.

But, sad to say, there is a loss here, in that the give-and-take energy with the audience, as clearly felt on earlier group videos like Imaginary Day Live and The Way Up Live (Eagle Eye Media, 2006), absolutely is absent— and its absence is something wholly palpable. That said, there still isplenty of energy here—albeit a slightly different kind—with a set that largely mirrors the tour set lists but crops a couple of pieces, including (unfortunately) Carmassi's solo spot and some of the encore material. Still, the video does end on a lovely subdued note as Metheny, alone onstage with just an acoustic guitar, delivers a medley of some of his best-known songs including "Phase Dance," "Minuano (six eight), "Midwestern Night's Dream," "This is Not America," "Omaha Celebration" and "Last Train Home," amongst others, culled from—and in some cases, significantly re- harmonized when compared to—source albums dating as far back as his leader debut, Bright Size Life (ECM, 1976).

The group performs flawlessly yet with the kind of interaction and interpretive energy that makes what's missing here far less significant than what's included. Potter is a positive firebrand, whether he's playing saxophone, bass clarinet or flute; and his ability to deliver long-form solos that never descend into mere displays of chops are, instead, rare examples of in-the-moment construction, mirroring Metheny's own ability to spontaneously compose. There are those that feel Metheny's recent projects have lost some of the melodic accessibility that define the guitarist's flagship Pat Metheny Group, but on tracks like Unity Band's incendiary "Roofdogs," both Metheny (on his signature horn-like guitar synth) and Potter (on soprano saxophone) deliver set-defining, bar-raising solos that remain all the more powerful for the frenetic and muscular support from Williams and Sanchez.

Meanwhile, on "Come and See," the guitarist's impressive introduction on his almost unimaginable 42-string Pikasso guitar introduces a composition that, based upon Williams' repetitive bass riff, is more groove-heavy and echoes the modality of jazz legends past. Despite more complex changes that are also a part of the picture, they provide Metheny (now on his hollow-bodied electric) and Potter (switching from the bass clarinet of the head to tenor saxophone) the foundation for two searing solos that ultimately open up space for a lyrical feature from Williams—positioned increasingly as one of the most impressive young bassists of his generation (on both double bass and the electric variant), while a brief, ostinato-driven solo from Sanchez is as positively nuclear as Metheny fans have come to expect from a drummer who has, in recent years, increasingly positioned himself as a leader in his own right on albums like Migration (Cam Jazz, 2007) and even more impressive New Life (Cam Jazz, 2013).

Sanchez may solo rarely on The Unity Sessions, but he remains an impressive equal throughout rather than merely an exceptional accompanist...which would, most certainly, be enough. That said, his duo feature with Metheny, "(Go) Get It"—first heard on Trio 99>00 (Warner Bros., 2000) and, in this case, with Metheny switching from his hollow-body electric guitar of early tour dates to the fierier, overdriven fretless classical guitar of later performances—sends this barest sketch of a tune up into the stratosphere and beyond, making clear precisely why he's been Metheny's drummer of choice for closing in on 15 years.

With dozens of live dates under the group's belt, even as the looser material from Unity Band has evolved, so, too, have Kin (<—>)'s more composition-heavy pieces. Playing all but two of the latter album's nine pieces, the way the band integrates with the Orchestrion has, with the benefit of all those gigs, become more natural, making complex pieces like the title track flow more organically, while simpler compositions like the near-hymnal "Born"—one of Metheny's most beautiful pieces of writing since "Farmer's Trust" back in the '80s—breathe with far more air, more reverent simplicity...and, as it builds, more restrained dynamics that make it all the more dramatic when the band opens up just that little bit more.

And so, in the final analysis, is Metheny's new approach to documenting live performances something that can work? Absolutely. Does it miss having the give-and-take of an enthusiastic audience energy? Positively.

But given the current state of live performances—where fans who profess to "love" their favourite artists are, nevertheless, unwilling to show them the respect they deserve when asked that no recordings be made—this may be the new reality...or, at least, one of them. Metheny may be right that, at some point, it may finally become de rigueur for audiences not to distract those around them with raised cameras and tablets; there are even signs that change may already be in the air.