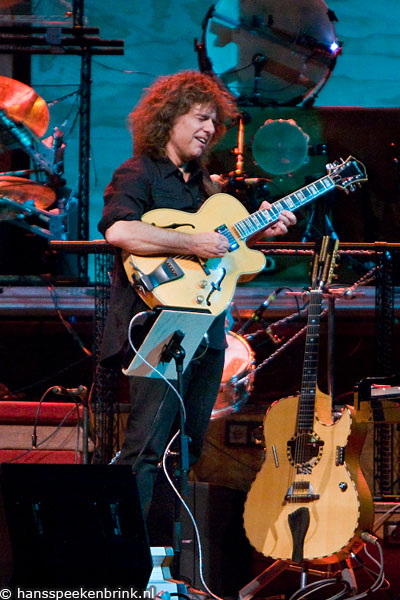 In plays such as Medea and Alcestis, the ancient Greek tragedian Euripides was roundly criticized, even parodied, for his use of an artificial plot device or deus ex machina ("god from the machine"), because it violated narrative logic and challenged the audience's suspension of disbelief. Guitarist Pat Metheny, never one to shy away from wrathful gods, has taken a bold step on his latest tour: eliminating his band in favor of a miraculous machine able to extend and expand his musical visions. Does this negate the human feel and interactivity at the heart of jazz performance or is it a breath of fresh air, winds of change ushering in new solutions to old problems? One man's band is another man's machine.

Few jazz artists have reached the stature of Metheny, who, if not exactly a household name, nevertheless enjoys public accolades more associated with the echelons of rock stardom than that of your typical jazz icon. Yet he's no sell-out, no watered-down, genre-straddling, crossover opportunist, but a true seeker, willing to take chances, willing to risk his hard-won audience with ambitious and adventurous projects. His 17 Grammy awards (!) are matched by his top-of-the-poll rankings in 'serious' jazz-zines. Moreover, he has achieved an instantly recognizable, signature sound that separates him from the proactive pack of post-Jim Hall modernists like Bill Frisell, John Scofield and Mike Stern that moved guitar playing into the new millennium.

Since his first release as a leader, 1975's Bright Size Life, a trio outing with the late great bassist Jaco Pastorius and world-beat drummer Bob Moses, up to his most recent, Orchestrion, Metheny has been a distinctive voice in this music, combining homespun Midwestern Americana (he came up in the Kansas City music scene), angular neobop, avant-impressionism and a type of tone-poetry only possible in the evolving technosphere. His dreamy fusion of folk, rock and jazz is well documented in his work with the Pat Metheny Group (PMG)—with Lyle Mays, Steve Rodby and Paul Wertico completing the core quartet—while his 'straight-ahead' work is featured in fine trio and quartet outings such as Question and Answer (with Dave Holland and Roy Haynes), Dream Teams (with Sonny Rollins), Trio 99>00 and Live (with Larry Grenadier and Bill Stewart), Metheny Mehldau and Quartet (with Brad Mehldau, Grenadier and Jeff Ballard) and Day Trip (with Christian McBride and Antonio Sanchez).

Metheny's free-form leanings emerge in works like 80/81 (with Dewey Redman et al.), Song X (with Ornette Coleman), The Sign of 4 (recorded live at the Knitting Factory with Derek Bailey) and Zero Tolerance for Silence, this last a noisy collage that challenged even his staunchest fans. The guitarist's penchant for technological enhancements may be heard on New Chautauqua, where he overdubbed all the guitars and basses; Letter from Home and Secret Story, two heavily produced PMG projects, and the soundtrack to Imaginary Day, featuring his 42-string "pikasso guitar"—all precedents for Orchestrion, an outing that gives new meaning to concepts like 'overdubbing' and 'human feel.'

Remember those old movies where characters got spooked watching ghostly hands on a player piano? Metheny's Orchestrion apparatus is basically a highly-evolved player piano, only the ghost in his machine is computer sequencing software, MIDI triggering and a complex set of pneumatic (air pressure) and solenoid (electromagnetic) switches hooked up to robotic instruments. The labyrinthine linkage includes Yamaha Disklavier keyboards, a bottle organ (with wind-blown, liquid-filled glass piping), mallet instruments like marimba and vibraphone and a hodgepodge of guitars, basses, drums and percussion. No mere remix of sampled sounds, these acoustic and acoustic-electric instruments are actually played in real-time by mechanical sticks, mallets, felt-covered bars, feather dusters, strumming robotic arms and whatnot, right before your very eyes and ears. The relatively sensitive solenoid switches transfer details of touch, timing and dynamics to the instruments, reproducing rhythms and textures that closely mirror Metheny's musical taste. It's close enough to human to fool even the most discerning of listeners: in a recent JazzTimes blindfold listening test, former PMG bassist Mark Egan instantly recognized the guitarist's playing on a cut from Orchestrion but had trouble identifying the other 'bandmembers.'

In an email exchange in the midst of his European tour in March, Metheny fielded a number of on-the-fly questions about his music in particular and his life in general. On the topic of craft, he noted that he gets most involved with the guitar during a tour, a period when he plays more over the longest periods of time, usually about two hours of practice during the day followed by three hours on the gig. "I tend to use the intense touring periods as a kind of research and development zone for furthering my vocabulary and refining things I might want to do on the instrument itself."

In the 35-plus years since he started playing in vibraphonist Gary Burton's band, Metheny feels he has improved "quite a bit" and "can really get to many layers of detail in the way that I express ideas that are new for me. Each period seems to bring new things and, as I get more facility with the materials that I am interested in on the instrument, that in turn sows new possibilities for improvising and composing." Another important aspect of being on the road is that he develops a "deep connection to playing" from frequent performances in front of live audiences. "That gets you playing in a way that is just different than anything else," he notes. "I thrive on that."

Listening to Metheny's music, one is struck by his ability to construct floating, singable melodies that belie the complexity of his harmonic and rhythmic ideas. He suggests that, while it may be possible to analyze the harmonic and rhythmic aspects of jazz in a fair amount of detail, "the melodic aspect of things is by far the hardest to articulate and in many ways the most esoteric and elusive to develop." About other musicians he observes: "I hear great harmonic improvisers and great rhythmic improvisers many times more often than I hear great melodic improvisers. It is almost like it is not even on the radar for many people...[T]here is also a way to think of harmony and rhythm in a melodic way too and that is even harder to find." Metheny considers melody a "huge issue," something that keeps him constantly awake and on the alert for what can only be approximately summarized as "the good notes."

On the subject of composition, the guitarist states that he is always writing, but that he has to do a lot of it to get what he wants because much of it will end up in the Mac trash bin. "The past few years have been especially interesting," he says; "I feel like I am getting to a new level of understanding as a composer that is starting to parallel many of the things that I have worked on as an improviser. I always felt like I was way ahead as a player relative to the writing side; lately that is evening out." As far as avoiding ruts and germinating fresh ideas, Metheny has learned to accept his own affinity for certain harmonic moves and rhythmic grooves. "I realized one day that I could play on the changes for 'Are You Going with Me' for hours and hours on end and never get even slightly tired of it." Additionally, he continues to experiment with extended forms and structures, especially on his last two records.

One glance at the Orchestrion project video (available at Metheny's website) will convince viewers that a considerable learning curve is required, first to understand the machine's workings and then to manipulate its considerable capabilities with flexibility and finesse. While he is intimately involved in the hows and whys of his Rube Goldberg machine, he is quick to stress that it is only a tool, a mere "envelope" for ideas; mastering this "ax" is only a step in the process. Ultimately, as Charlie Parker is alleged to have said, a musician has to forget all that shit and just play. Metheny has his own analogy: "It is like someone who sees a beautiful house and wonders, hmmm, did the carpenter that built that place use mostly a Phillips screwdriver or flathead? It doesn't really make a huge difference to me as long as it is a really great house."

So where's the rest of the band? Is Metheny worried that deserving flesh-and-blood musicians are being replaced by semiautomatons? How is he going to have a conversation with this contraption? These are non-issues as far as the guitarist is concerned. In the first place, it's supposed to be a solo act. No one ever faulted Joe Pass for developing the ability to play melody, chords and basslines simultaneously. In answer to the second question, Metheny counters: "Did the cartoon version of Bambi put a real, live Hollywood deer out of a gig?"

His point is that the Orchestrion is merely a "different form," no better or worse, just different. As for conversation, he is having one—with himself. "I play for myself and myself only, but I try to be conscientious about the fact that the guy in the third row had to take a shower, pick up his date, park his car, get the tickets, wait in line etc. So I will do my very best to play my very best for myself—for that guy. Anything other than doing it that way would be a wild guess. As soon as you allow critics, audiences and everyone else to have a vote, you are dead. The fan that lives inside of me is the only thing I know for sure."

But if Metheny's prodigious machine can fool virtuoso listeners like Mark Egan into thinking that live musicians are playing, how far away are we from robotic improvisation? Now that computers can recognize speech and even beat chess grandmasters at their own game, how long will it take them to learn bebop licks or "Giant Steps" chord changes? How long before it is impossible to tell the difference between a human improvising and a machine programmed for 'creativity'—the jazz equivalent of a Turing Test? Metheny has an answer for that one too: "Not anytime soon." One man's band is another man's plan.