By Eyal Hareuveni
February 21, 2013
Sign in to view read count
In recent years, Norway has produced a generation of young, innovative musicians, sonic explorers who are redefining the roles of their instruments—guitarists Stian Westerhus, Kim Myhr and Petter Vågan, trumpeter Eivind Lønning and tuba players Martin Taxt and Kristoffer Lo.

This series led to a triple album, Formo's debut as a leader, comprised of two recorded performances and a solo studio recording. 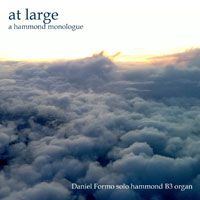 This solo exploration of the sonic spectrum and qualities of the Hammond B3 is the last recording in this series. It was recorded in the Organ Hall at NTNU (the noted music conservatory, Norwegian University of Science and Technology in Trondheim) in June 2012. Formo sees this recording as a concentrated distillation of his work with the organ.

Each of the 12 pieces is a short sonic poem. Formo pushes the sound envelope of the organ—its electronic tones, mechanical woodwinds, electric sine waves, abstract white noise, vibrato, percussive and delay effects—carefully investigating and experimenting with its timbre, physical aspects of the sounds, the resonance and the elasticity of its sounds in order to find new patterns.

In his hands the organ is stripped from all familiar conventions used in gospel, blues and jazz. It becomes a modern sound generator, creating meditative, ethereal and atmospheric sounds as more substantial and concrete sounds. None of these sound obvious. This arresting exploration of the organ has only begun—as the last piece, "Question Still Unanswered," suggests.

This improvised duet with church organ player Nils Henrik Asheim was recorded in January 2012 at the old Vår Frue Kirke (The Church of Our Lady) in Trondheim.

The classically-trained and unique improviser Asheim has an extensive experience of playing with various improvisers and sound explorers such as reed player Frode Gjerstad, drummer Paal Nilssen-Love and electronics master Lasse Marhaug. The unusual match of the Hammond organ with its instrumental ancestor and acoustic role model, the church pipe organ, enforces both players to explore new possibilities, to articulate a common discourse and finally arrive at new musical conclusions.

The five improvisations are reserved and nuanced textures, each has a different emphasis on temperament, time, space, density and closeness of sounds. They begin with reverent, introvert playing, patiently building the tension, adding layers of sounds to the palette till the stormy eruption at the coda of "Part II." Than it dissolves into newer sonic explorations, slowly reconstructing new emphatic dynamics, culminating with the intriguing and moving "Part V," that summarize former dynamics. It is a beautiful and timeless soundscape, tempting to submerge in its encompassing sounds. 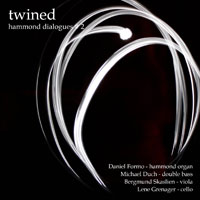 This quartet was recorded in March 2012 at Rådhussalen hall in Trondheim public library. For this encounter Formo invited musicians who have background in contemporary music and free improvisation. Cellist Lene Grenager is a member of all-female free improvisation quartet Spunk and contemporary, improvising quartet Lemur, with double bassist Michael Francis Duch, who has collaborated with many innovative improvisers and sound sculptors as John Tilbury, Mats Gustafsson and Otomo Yoshihide.

This session matches the organ with a self-contained improvising ensemble with a distinct dark sound. The organ adds a brighter color to the intricate and highly elaborate, electro-acoustic interplay of the strings trio, anchoring and liberating it in looser, open-ended textures. The modern organ patiently reaches an equal and often dominant role among the older string instrument at the climax of the second piece, setting the atmosphere for the last piece.

The quartet becomes on this piece a free improvised unit of the best kind, formulating captivating, rich language and almost telepathic interplay.