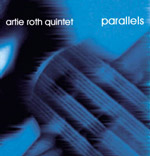 Parallels, a collection of original compositions by bassist/leader/arranger Artie Roth, is another entry from the sizzling Canadian jazz scene. The quintet's front line of John MacLeod (flugelhorn) and Kelly Jefferson (tenor and soprano saxophones) receives support from the seemingly ubiquitous David Braid (piano), familiar from Set In Stone, Vivid, Beginnings and William Carn's Other Stories. Musicians who get to know one another tend to play with each other—MacLeod is in Braid's band, Jefferson is on Carn's record, and both end up here. From the first moments of Parallels, however, Kevin Dempsey's positively crackling drums set the tone and absolutely drive the record, supported by Roth himself as the rhythm section.

The eight tracks range from seven to twelve minutes, averaging nine; the musicians have a lot of time to build a solo as the arrangements allow each track to evolve. But the record just flies by, grabbing you for the trip and never letting go. Roth's compositions, which are squarely mainstream, nevertheless are never predictable in structure, taking many twists and turns as they progress. "Rhyme and Reason" blasts out of the gate, propelled by Dempsey (and Roth), taking a standard unison head intro and leading to intertwined trumpet and sax lines, but then both Roth and Dempsey take solos that are so fine, it's a shame they have to end. The bar is set quite high at the start, but the record never wanes.

Not that every track has such high energy—each one has its own internal logic, and nary a moment of flab. Even "Mountain," the longest track, which feels like an atmospheric, ECM-ish entry, complete with an intro of arrhythmic percussion, piano string plucking and arco sliding notes, keeps moving forward, maintaining interest. Like its title, the track has grandeur and a feeling of large, open space about it.

Despite the fact that Parallels offers a lot of solo room, the record does not have the feel of a blowing session or a soloing vehicle. This is where Roth's arranging skills shine, along with his bandmates' sensitivity. Everyone does get to move to the front, yet it all seems so seamless that each track's solos feel like inevitable and natural responses to where the tune is at the moment. Thus it is the band that makes the impression, rather than the individuals in it. Dempsey stands out only because he's almost always present, tastefully and forcefully moving the music along.

Parallels is a very full-bodied record with a lot going for it. Roth has shown himself to be a formidable player and composer who allows and gets his fellow bandmembers to shine. Recommended.