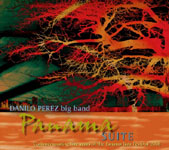 Recorded in Boston with students and faculty of both the Berklee College of Music and the New England Conservatory in the band, this suite by Danilo Perez commemorates five years of the Panama Jazz Festival, where it was also first sold this January. The CD is short, presenting only the quarter-hour suite, described as "a three-movement composition that combines urban sounds with Panamanian folkloric elements in a big band setting."

Most impressive is the third and final movement, "The Celebration/Quiero Amanecer," incorporating a female vocal quintet singing the title Spanish phrase as the most celebratory riff in a richly multiple, contrapuntal structure of contrasting refrains from horns, saxophones and rhythm. The theme of multiples continues through the movement as first trombones, then saxophones and trumpets, trade solos that build to concurrent climactic exchanges. It's a joyous rave-up, an infectious conclusion to a suite worthy of being a festival anthem.

Themes that contrast in the final movement are introduced in the first two. "Awakening/El Despertar" develops a simple riff theme over a folk rhythm (Perez creates a polyglot section by mixing his Fender Rhodes keyboard and an electric bass with piano, drums and two percussionists), a tenor sax solo emerging with backgrounds dominated by baritone sax until a second theme begins with keyboards and becomes orchestral to close it out. "The Quest/La Busqueda" finds Perez exploring orchestral colors in a rubato prelude to a piano solo over a slow montuno rhythm, gaining momentum for a soprano sax lead and building through tandem sax statements to a climax segueing into the final celebratory movement.