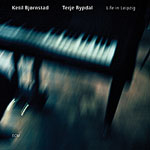 The reward is great when a new and unusual teaming of musicians turns out to be not only artistically and critically successful, but the genesis of long term musical relationships. When ECM's Manfred Eicher proposed bringing neoclassical pianist Ketil Bjørnstad, generally rock- inflected, but stylistically broad guitarist Terje Rypdal, cellist David Darling and drummer Jon Christensen together, it seemed more incongruous than inspired. Eicher's reputation for astutely seeing potential where most would not resulted, however, in two albums from this quartet dubbed The Sea—The Sea (ECM. 1995) and The Sea II (ECM, 1998). Both explored the rich nexus where Bjørnstad's classical leanings, Christensen's intuitive free play, Darling's deep melodicism and Rypdal's jaggedly textured lyricism came together for a sound like no other.

The challenges of keeping a quartet together are many and, as essential as the contributions of Darling and Christensen were, it was the unexpected serendipity of Bjørnstad's boldly thematic pianism and Rypdal's edgy stance that defined The Sea's overall soundscape. While various permutations and combinations of The Sea's personnel convene occasionally, Bjørnstad and Rypdal have been touring as a duo since 1999. Despite its nearly ten-year existence, Life in Leipzig is the duo's first recording, taken from a 2005 concert in Leipzig, Germany.

The duo not only digs back into The Sea's Bjørnstad-composed repertoire, but solo works on and off ECM. With the exception of the newly written "Le Manfred," joined with "Foran Peiesen" from If Mountains Could Sing (ECM, 1995), Rypdal also contributes material from Skywards (ECM, 1997) and The Radiosong (Beatheaven, 2002), his collaboration with Norwegian guitarist Ronni Le Tekro. Bjørnstad augments his soft solo reading of a fragment from Edvard Greig's "Notturno," with self-penned material from Water Stories (ECM, 1993), Before the Light (Emarcy, 2001) and The Rainbow Sessions (Universal, 2007).

While Bjørnstad possesses a gentle touch and subtly nuanced approach on this 54- minute program where melody is paramount, alongside cinematic textures and broad dynamics, he also matches Rypdal's aggressive attack, most notably on the guitarist's memorable closer, "The Return of Per Ulv," one of his most memorably lyrical compositions. Equally, while Rypdal's tone is most often distorted, use of volume pedal swells, whammy bar swoops and delay- drenched ambient textures help him find middle ground with Bjørnstad. The eleven tracks are, indeed, compositions, but the intimacy of the duet format allows for significant improvisation and interpretation, resulting in the remarkable synchronicity of "The Sea II," where it's less a case of one leading and the other following than two musicians so aware as to be able to intuit the other's moves almost before they're made.

That both combine a classical background, an improvisational approach avoidant of the traditional language of jazz and a strangely paradoxical combination of textures, makes Life in Leipzig a uniquely unclassifiable experience. Moments of stark beauty coexist with dramatic dissonance, and unforgettable melodies abound on an album that's warm as a summer breeze and cool as the waters of a Nordic fjord.