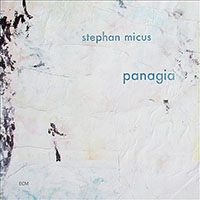 Almost like clockwork since 1983 (though he began his association with the label, on its subsidiary JAPO label, in 1977 with Implosions), multi-instrumentalist Stephan Micus has been delivering albums to ECM every one-to-three years. His modus operandi is largely the same: continue to scour the world for rarely exposed ethnic instruments and use them in contexts different than those for which, perhaps, they were originally intended and, over the course of decades, create a body of work as profound in its spirituality as it is its beatific musicality.

Panagia represents a landmark of sorts: Micus' 20th album for ECM/JAPO, coinciding with his 60th birthday in early 2013. That Micus has built a singular life's work over the past four decades is irrefutable. What always makes his recordings worth hearing is his remarkable ear for new textural contexts and fresh instrumental combinations, in this case, from countries as far afield as Bavaria, India, China, Pakistan and Egypt, in addition to a 14-string guitar, of his own design, that affords a variety of sonic possibilities, ranging from doubled to sympathetic strings. Panagia introduces the Chitrali sitar on "You are the Life-Giving Rain," a meditational piece that also employs six bowed dilruba from India and five bowed sattar from western China.

The term "world music" is one bantered about regularly, but in most cases it refers to a western artist incorporating one or two instruments from both antiquity and foreign cultures; Micus is the quintessential world music artist, as for him it truly is one world—a world where, on "I Praise You, Sweet-Smelling Cypress," he finds a meeting place for 14-string guitar, eight dilruba, three sattar, five nay (hollow reed flute from Ancient Egypt) and 10 voices, traversing three continents, four countries and more than two millennia.

In his liners, Micus writes: "Throughout the world people put their trust in a female goddess. In Greece she is called Panagia." Returning to Greece for the first time since Athos (ECM, 1994), Panagia's eleven alternating tracks mirror that earlier recordings' interchanging of instrumental and vocal compositions, even opening and closing with a similar blend of Bavaria zither and voice. But even more revealing is a less-than-obvious symmetry, where the second and penultimate tracks, "You are the Treasure of Life" and "You are a Shining Spring" are predicated on the use of a variety of bells and chimes, with only the sound of two dilruba to add a melodic context to its transcendental ambience.

It's the kind of music that takes Micus years to make, recording it, as he does, at his home studio on Mallorca, an island off the coast of Spain that's separated enough from the modern world to allow him to slowly, patiently, one layer at a time, build this timeless music that manages to create a tranquil, slow-moving alternative to an increasingly stressful and fast-paced society. Micus may deliver his albums like clockwork, but that only means albums like Panagia are to be eagerly anticipated as rare opportunities to escape the hectic pace of everyday life and experience a welcome alternative to renew, refresh and reinvigorate.