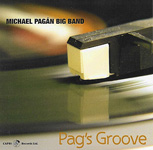 For his second album on Capri, pianist/composer Michael Pagán leads his big band on eight selections that demonstrate his ability to add texture and harmonization to the arrangements. Other than the Ray Evans/Jay Livingston standard "Never Let Me Go," all of the tunes are originals.

Originally from Ohio and with a degree from Northwestern, Pagán was selected by Downbeat, while still a student, as a "Musician Deserving Wider Recognition." He has taught jazz composition and arranging at the University of Colorado at Boulder, from where many of the musicians on this date hail. Among the personnel, I'm most familiar with trumpeters Greg Gisbert and Brad Goode from previous recordings; I was also impressed with trombonist's John Hines' In The Pocket album from last year.

Appropriately, the album begins with the swinging "Essential Trivia," which serves a fine introduction to the band. Greg Gisbert's flugelhorn is featured on the bossa "Lyric Interlude," and the ballad "Never Let Me Go" is a featured opportunity for Pagán and Tom Myer (on tenor saxophone). On the title track, a tribute to the original Milt Jackson, "Bag's Groove" (from the 1954 Prestige recording), trumpeter Garner Pruitt interprets the reading of Miles Davis' rather famous choruses, harmonizing here with five saxophones, followed by some nice touches from John Hines' trombone.