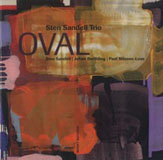 Pianist Sten Sandell and his trio have excelled themselves on record in 2007, and listeners accordingly owe a debt of gratitude to both Intakt and Cleanfeed labels, whose "Strokes documented the trio in the company of saxophonist John Butcher for a program of music that exemplifies in-the-moment creativity of an uncommon order.

In comparison, Oval thus has a lot to live up to, but the trio's flagrant disregard for precedents and regard for the values of individual and collective identity somehow render the comparison irrelevant. This is a working unit of the highest order and that's abundantly obvious on "Ovala Takter I, the opening passage of which finds Standell working with the piano strings and in conjunction with bassist Johan Berthling, evoking a dry, arid soundscape pulsing with life. As the piece evolves the energy level rises, but these players are so closely in tune with their craft that they stay clear of Cecil Taylor's looming shadow. Theirs is arguably music more alert to nuance as well, so that the ebb and flow of the piece, whilst profoundly the consequence of spontaneous form, is subject also to the musicians' whims in the best sense of the term.

If the point needs to be reiterated that this is a group marking out its own distinctive territory, then "Ovala Takter II is the place where it happens. Standell is clearly alert to and aware of every possibility the piano has to offer as a producer of sound. The degree to which he subverts the idea of the keyboard virtuoso is admirable, even whilst it suggests nothing other than the fact that he's a virtuoso himself. There are greater ends than the mere showing off that virtuosity can imply and some of them are obvious here.

"Ovala Takter III, in turn, puts that message across in a way that almost turns the program into a manifesto. For a while, the dialogue between Standell and Berthling is strong enough to suggest that drummer Paal Nillssen-Love is somehow superfluous, but as the piece progresses it becomes obvious this is down to the latter's acutely sensitive listening.

This is a piano trio working well outside the norm, and consequently it's very much on whatever the cutting edge amounts to these days. The music it makes is rich and profoundly rewarding.