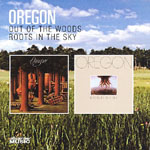 It's dangerous to ascribe new musical paradigms to one artist or group. There's no denying, however, that Oregon was one of the first groups to explore the nexus of jazz, classical and folk musics with ideas endemic to the music of India, Brazil and other cultures abroad. Although Oregon's entire discography has been available on CD at different times, a number of titles are currently out of print. Out of the Woods / Roots in the Sky is a welcome remastered reissue of the group's first two discs for Elektra, originally released in 1978 and 1979.

Signing with Elektra after an eight-year run with Vanguard gave Oregon a real budget and access to quality studios for the first time, and it shows. Both albums were cleaner, richer and more sonically expansive than previous releases, and these remasters are an improvement over the briefly available 1992 Discovery CD issues. Along with its final Elektra release, 1980's In Performance, these releases form a trilogy representing the end of the all-acoustic Oregon; Towner began to incorporate synthesizers on the group's self-titled 1983 ECM debut.

Woods was, in fact, Oregon's most easily approachable album to date, though it made no musical compromises. Towner's "Yellow Bell" may feel light and airy with a lithe melody, but shifting meters and his distinctive voicings make it no less of a challenge than songs whose complexity exists more clearly on the surface.

Walcott's "Dance to the Morning Star," featuring Towner's resonant twelve-string guitar, demonstrates how the subtlest percussion can create strong forward motion. Walcott was a master of implication, and some of his best work can be found here. Bassist Glen Moore has always been a dualistic writer, capable of abstruse ideas and a wry sense of humor. "Fall 77" combines both with a playful melody that shifts into a riff-based solo section featuring McCandless' bass clarinet.

Roots is a more difficult and, at times, darker album than Woods. Walcott's "House of Wax," featuring his innovative sitar work, is a relatively simple concept, yet the piece remains a greater challenge. Towner's brief and idiosyncratic "Orrington's Escape" segues into Moore's title track, another piece that builds from a simple but angular idea, finding Oregon at its most dynamic.

Still, Towner's energetic "June Bug" and broodingly open, clay pot-driven "Vessel" are as accessible as anything on Woods. Oregon would continue on after Walcott's tragic death in 1984, but these two releases would raise the bar for everything that followed.

Title: Out of the Woods / Roots in the Sky | Year Released: 2007 | Record Label: Collector's Choice Music