Home » Articles » Paul Collins: Out Of My Head

Paul Collins: Out Of My Head

By Doug Collette
October 9, 2018
Sign in to view read count 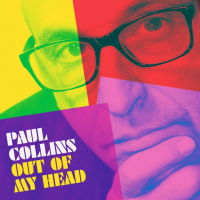 There may not be anyone on the planet more loyal to rock and roll than Paul Collins Jazz. From his days in the Nerves (with Americana master Peter Case) to fronting his namesake band the Beat, this icon of so-called power pop has always evinced an abiding faith in his own music (even in solo digressions from his niche).

On his latest expression of commitment, this songwriter and musician conjures a world unto himself. "In And Out of My Head" features a charmingly ramshackle rhythm section supporting a swirl of acoustic and electric guitars, all of which is surrounded with harmony vocals for maximum dramatic effect. As on "Go," it's as if the the mid-to-late Sixties heyday of The Beatles was just yesterday, but Collins and company display no apparent self-consciousness about the passage of time. Rather, the performance radiates an abandon that may very well be based on the skeletal foundation pictured in fluorescent hues on the back cover of the CD: Collins (on guitars, drums and vocals) plus Paul Stingo (bass and vocals).

This stripped-down approach no doubt also accounts for the brevity of that track—it's less than two minutes in duration—and similar restraint earmarks a number of other cuts. Nothing extraneous crops up over the course of "Kind of Girl," "Just Too Bad You're Leaving," "Emily" and "Beautiful Eyes" or any of the eleven tracks, the engineering of which by the harmony vocalist here, Tony Leventhal, is yet another sign of pragmatism (not to mention Paul Collins' abiding independence).

Rachel Alina's mix not only reveals how the small touches of hand-claps and counterpoint singing mesh with the backing tracks, but the density of sound compels hiking up the volume when playing this record. While there may not be any real innovation on Out of My Head, "You Belong to Me," to name just one cut, conjures up a timeless joy: it's the sound of a middle-aged man (a bespectacled photo of whom appears on this front cover) on a long-term quest to stay in touch with his inner teenager.

But Paul Collins effectively utilizes his powers of reflection for a song like "Tick Tock." Balancing the edgy pep elsewhere, a vulnerable grace also echoes through "Lost Again," where Jason Perrillo slowly unfurls organ lines that maintain the measured pace of the performance. Whether or not such near-subliminal nuance helps propels this latest project of Paul Collins' into the mainstream, Out of My Head stands as a welcome addition to the man's ongoing devotion to his muse.

In and Out of My Head; Go; Kind of Girl; Just Too Bad You’re Leaving; Emily; Midnight Special; You Belong To Me; Killer Inside; Lost Again; Tick Tock; Beautiful Eyes.