By Troy Collins
September 23, 2006
Sign in to view read count 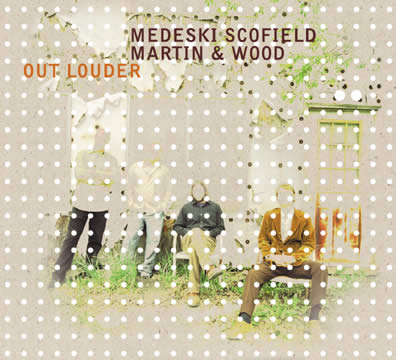 A far cry from this quartet's previous encounter, Out Louder is a summit meeting for all four players. Where 1998's A Go Go (Verve) found the trio performing as guitarist John Scofield's backing band, here the working relationship is far more collaborative. The added grit and gristle, along with the more extreme outside elements, demonstrate Medeski and company's influence in writing this time around.

On this set, recorded for the trio's Indirecto Records imprint (whose first release was the abstract 1997 MMW disc Farmer's Reserve), one can hear how these four absorbed the grungy vibe of their downtown Brooklyn basement studio, Shacklyn. Outside of the major label machinery and corporate studio environment, these four players improvised and co-wrote for a week, unhampered by the looming constraints of the marketplace.

Opening with the Meters-inspired "Little Walter Rides Again," the quartet finds itself in familiar territory, exploring a deep, snappy groove. With the entrance of "Miles Behind," however, one can tell they're not in Kansas anymore. A brief but wild ride through a knotty web of propulsive fusion echoes not only the trio's more outré experiments, but also Scofield's recent work in such ensembles as the heavily electrified Trio Beyond. "Tequila and Chocolate" features one of the guitarist's more unusual solos on record, phase shifted and distorted, riding a lilting bossa nova rhythm before drifting back into his typical lyrical fare. Scofield's contributions to this album are among his most invigorating and creative work.

But not all is stripped-down, grungy funk. "Cachaca" has a pensive melody and bright rhythm, while "Hanuman" features a deep bottom end and dark ambience. John Lennon's "Julia" is interpreted as a melodious, spare dirge that's beautiful in its restraint, likely one of the most gorgeous pieces these players have recorded together. Similarly quiet but far more esoteric is "Telegraph," which explores a different side of freedom, investigating the spectral overtones of dub.

Ratcheting up the intensity level, "What Now" and "Down The Tube" delve into passages recalling the sort of angular, frenzied territory found in free funk, but crossed with this group's own own demented psychedelic excess. The later tune is the album's free jazz centerpiece, an eleven-minute discourse in the most abstract and raw textures Scofield and Medeski can conjure, over the rhythm section's attentive support.

Funky, infectious, brash and sometimes downright beautiful, Out Louder is a brilliant culmination of these four artists' talents.