Eddie The Rat: Out Behind the 8-Ball

By GLENN ASTARITA
December 19, 2008
Sign in to view read count 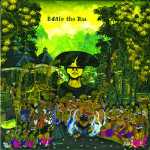 Eddie the Rat is the group moniker for San Francisco-based multi-instrumentalist Peter Martin and his merry quartet. With the band's seventh release, they continue to etch a niche sound that truly does provide a mark of distinction. Think of a modern day John Cage delving into avant-garde, progressive-rock and pop music amid the odd-metered time signatures, thrusting percussion vamps and unlikely instrumentation.

With an unorthodox assortment of implements, Martin looms as a true multitasking artist, where he simultaneously performs on piano, bass drum and cajon. And while his music is organic and earthy, the largely acoustic format doesn't imply that the ensemble doesn't pack a punch. However, vocalist Molly Tascone does smooth out the impacting parts with her dainty recorder lines and whispery vocals. But it's an uncanny blend of ostinato motifs, quaint interludes and offbeat folk musings that partly serve as the unit's emblematic modus operandi.

On "Out Behind The 8-Ball," Tascone's understated vocals ride atop pumping rhythms and contrasted by a freaky Amazonian tribal ritual. Moreover, they impart a punkish pop theme, awash with Martin's avant, classical piano voicings during "March of the Haydevil (Don't Apologize for Universal Law pt. 2)." Here, they depict a fine line between childlike innocence and destructiveness. In other areas, they dish out programmatic cadences, thrashing world beat grooves, and multilayered oddities. Simply stated: hearing is believing.

My Little Red Stungun; Lela, My Familiar; The Closet People; Out Behind the 8 Ball; Pete Townshend Is My Dad; (Once Again, This Time Around The) Aphedonia Blooze; Place Your Head On the Brick; Don't Kill the Black Chicken; March of the Haydevil; Slither at the Stem; Dance of the Puzzle Pieces; Farewell to Edgar 12. Farewell to Edgar

About Eddie The Rat