BY EDWARD BLANCO
August 8, 2012
Sign in to view read count 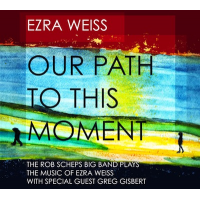 A veteran jazz artist and educator, Oregon-based Ezra Weiss is much more than a fine pianist; he is a talented composer and arranger nominated for Best Arranger under the Rising Star category of Downbeat Magazine's 60th Annual Critics Poll of 2012. Since graduating from the country's oldest music school (Ohio's Oberlin Conservatory of Music), Weiss has produced five recordings as well as penning countless compositions for various high school and college music departments. Weiss has always yearned to produce a big band album employing many of these original charts and now, finally, accomplishes this on Our Path To This Moment, featuring The Rob Scheps Big Band with special guest, trumpet luminary Greg Gisbert, gracing the album on three tracks.

While featuring a repertoire of primarily original charts, Weiss does include a lively, quick-tempo'd arrangement of the Jule Styne/Sammy Cahn classic "It's You Or No One," leading the rhythm section and featuring Scheps on tenor. Scheps, whose résumé includes work with Buddy Rich, Mel Lewis and Gil Evans, among others, leads this stellar 17-piece ensemble, providing the kind of musical energy, power and finesse expected from a world-class orchestra, serving as the perfect vehicle Weiss's musical design.

The first step on the road map to this big band achievement for Weiss is the sprawling orchestration of the melancholy title piece, containing solo contributions from Gisbert and the bandleader on soprano, mixed in-between brass and other delicate interludes from the group. "Rise and Fall" gets a rewrite here; first recorded on one of the pianist's previous albums and arranged for a small group, this new arrangement features a lively horn section capturing Gisbert's intense trumpet forays matched by Robert Crowell's burly baritone on one of the most sophisticated scores of the set.

Weiss includes two compositions from his days as a student, calling upon trombonist Craig Hilton and Tomas Phillips to play the melody and give new life to the dark-toned "Kunlangeta," while the band explores a light-textured landscape, with the assistance of alto saxophonist David Valdez and pianist Ramsey Embick, in conveying the warms sounds of "The Promise." Delivering solo highlights along with tenor man Scott Hall, Weiss pays homage to his wife on the richly textured "Jessie's Song," where the band is also pronounced.

Last, but certainly not least, "Wayfaring Stranger"—a song introduced to the pianist by a professor at Oberlin—begins with a long solemn introduction by Gisbert, and then explodes with bursts from the horn section, Scheps' tenor and rumbling percussions from drummer Ward Griffiths and percussionist Chaz Mortimer, ending the session on a strong note.

Weiss' music seems to be in very able hands with The Rob Scheps Big Band, with the composer/arranger's mission for a professional outing of previously penned orchestrations successfully completed. Though a long journey for Weiss to get to this point, with Our Path To This Moment, the trek comes to quite a pleasurable conclusion.

Our Path To This Moment; Rise And Fall; It's You Or No One; Kunlangeta; The Promise; Jessie's Song; Wayfaring Stranger.