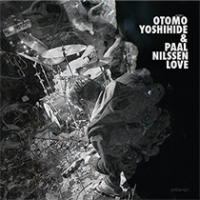 The new recording of these expressive musicians was recorded at the Jazzhouse Club in Copenhagen, but, as can be expected, there is no attempt to form an intimate musical atmosphere. It features both musicians in top form, demonstrating their versatile and diverse improvisational strategies and imaginative ideas about sound, pulse and space.

The 34-minute piece begins with a dense wall of aggressive sounds—torrents of metallic guitar lines and muscular, tough drumming, both Yoshihide and Nilssen-Love pushing each other to his limits. But the two do not attach themselves to any specific form. Soon the high-octane attack morphs to patient, spare sonic searches. Yoshihide focuses on investigation of the resonant spectrum of the strummed guitar strings, creates beautiful, nuanced minuscule sound events, while Nilssen-Love answers him with clever employment of the cymbals surfaces. These sonic meditations methodically gain volume and power until its inevitable volcanic catharsis. But, again, Yoshihide and Nillsen- Love's musical vocabularies are too rich to allow both to be immersed in one specific form of interplay. The boundless energy of both is channeled to a rhythmical play, not rooted in any pattern, first led by a drum solo of Nilssen-Love, and then the two return to a tight aggressive interplay, spiced even with distorted funky lines, until the climatic coda.