By MIKE PERCIACCANTE
August 9, 2008
Sign in to view read count 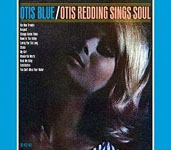 It's tough to review a classic album. What new can be said? In the case of Otis Blue/Otis Redding Sings Soul, quite a lot.

The beauty of this reissue is that the first 11 songs on each of the set's two discs constitute different versions of the original album—one mono, one stereo. Mono versions of early-to-mid-'60s releases have a much warmer sound/feel. Excluding vinyl, with clean copies increasingly difficult to locate, mono recordings are becoming harder to find.

Other reasons to love the mono disc are the six alternate versions. Previously unreleased mono mixes of "Respect," "Ole Man Trouble" and "I've Been Loving You Too Long" are quite different from the original mono versions. Six additional tracks on the mono disc are live from the Whiskey A Go-Go in April, 1966.

Unfortunately, stereo recordings from this era sound almost antiseptic, with very clear and extreme channel separation. Though a very clean remaster, the stereo version doesn't come across as a performance, but rather a studio creation pieced together. The stereo disc, isn't without merit, however. In addition to the album, it includes an alternate version of "Respect," and five tracks recorded live in Europe in March, 1967.

The original Otis Blue/Otis Redding Sings Soul, amazingly recorded in a twenty-four hour period, is a tour de force, its songs all becoming soul classics. "I've Been Loving You Too Long" (co-written by Redding with Jerry Butler) is majestic in its simplicity and heartfelt anguish. Redding's "Respect," made more famous by Aretha Franklin, is about taking pride in oneself and takes on a completely different perspective when sung by a man. "Ole Man Trouble" is another mournful, pained, tender and gritty performance.

The covers are well-chosen—not the run-of-the-mill safe choices made by many '60s artists. Redding took chances, choosing to cover Sam Cooke ("Change Gonna Come," "Shake" and "Wonderful World"), The Rolling Stones ("(I Can't Get No) Satisfaction"), B.B. King ("Rock Me Baby"), Solomon Burke ("Down In the Valley") and William Bell ("You Don't Miss Your Water").

Each song is given a distinctly Otis Redding reading. Redding's balls-to-the-wall version of "Shake" sounds like it could have been recorded in a Mississippi juke joint. "Change Gonna Come" is a bit grittier than Cooke's original, but Redding does his hero proud, while "Rock Me Baby" is given a sweltering Stax/Volt soul-funk treatment. "Satisfaction" sounds like Redding wrote it, with its additional off-the-cuff and embellished lyrics. "Down In The Valley" is equal parts gospel hymn and lustful soul, and "You Don't Miss Your Water" is another song about love and loss that, in Redding's hands, sounds like it could be the companion piece to "I've Been Loving You Too Long"—the intense plead of a broken man.

Liner notes by Redding's widow and very nice packaging make this is an excellent deluxe collection—essential listening for Otis Redding/soul music fans and a good primer for the uninitiated.