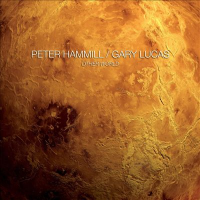 On paper, this alliance might seem like an improbable encounter. Vocalist and multi-instrumentalist Peter Hammill is revered for his work with the legendary progressive rock unit, Van Der Graaf Generator. While guitarist Gary Lucas' resume contains a historic affiliation with avant, blues-rock wiz Captain Beefheart amid stints within New York City's downtown scene denizens, vocalist Joan Osborne; numerous solo albums and other heterogeneous projects. Yet Other Worlds emanated from Lucas' affinity for prog rock and admiration of Hammill's longstanding eminence in the genre, followed by meetings and dialogues through the Internet.

The duo exceed expectations. Hammill is true to form via his authoritative vocal attributes, commanding tone and wavering inflections that parallel notions of a deity from the heavens providing us mere mortals with a sense of direction. It's an acoustic-electric set featuring Lucas' imaginative guitar work and Hammill's textural use of keys, guitar and sound-shaping forays. Diversity is a continuum. For instance, they intersperse tidbits of Americana on the opener "Spinning Coins," enamored by the vocalist's hybrid folk-prog connotations, injected into a striking melodic hook.

It's an auditory feast, as they infuse spacey guitar choruses, streaming electronics effects and airy panoramas into ballads and dappled backdrops. The artists navigate through multiple dimensions and on "Attar of Roses," the sounds of raindrops embellishes a gently woven acoustic guitar intro, tinted with ethereal choruses and swelling atmospherics akin to an artistic montage. However, they modify the mood during "Reboot," where Hammill's lyricism and spiraling pitch casts notions of an apocalyptic occurrence, contrasted by Lucas' reverse engineering motifs and sinewy slide guitar licks. Each composition poses a slightly divergent framework, patterned with distinct propositions, and complemented by prismatic colors. Consequently, the program is augmented by a motivational force that accentuates the entire presentation.

Spinning Coins; Some Kind of Fracas; Of Kith and Kin; Cash; Built From Scratch; Attar Of Roses; This Is Showbiz; Reboot; Black Ice; The Kid; Glass; Two Views; Means To An End; Slippery Slope.