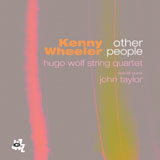 Since moving to the Italian Cam Jazz label after over thirty years with ECM, trumpeter Kenny Wheeler has experimented more liberally with context. He's played in a duo setting with long-time musical partner/pianist John Taylor on Where Do We Go From Here? (2004); a sax/piano/bass/trumpet quartet on What Now? (2005), and a two-guitar/bass/trumpet ensemble on It Takes Two! (2006). The thread winding through these three very different projects is, without the participation of a drummer, a chamber jazz ambiance.

Other People takes that concept to its logical conclusion, with Wheeler writing new music for the Wolf String Quartet. Taylor guests on a number of tracks and, while Wheeler's distinctive horn can be heard on all but two pieces, this is an album focusing more on composition than improvisation. This is no Third Stream music or "jazz with strings" project; instead, it's a distillation of the key components that have distinguished the trumpeter's writing for decades—a personal and often melancholy lyricism, an immediately recognizable harmonic approach, and the kind of gentle rhythms that, even when he's worked in a more conventional jazz setting, have most often been about graceful elegance rather than aggressive forward motion.

The entire program is exceptional in its refined beauty, but it's the two tracks on which neither Taylor nor Wheeler appear—the brief "Nita" and nearly fourteen-minute "String Quartet n. 1"—where Wheeler's unique compositional style is, curiously enough, at its clearest. Without the benefit of familiar instrumental voices that have become almost indistinguishable from the music itself, anyone familiar with the trumpeter's writing will have no trouble recognizing them as Wheeler compositions. While attention is paid to the kind of gradual thematic unfolding more prevalent in classical chamber music, and a temporal freedom that allows for brief passages of greater drama and rubato tone poetry, there's often still a pervasive, albeit subtle, pulse.

There's little doubt that much of the music could be rearranged for a more traditional instrumental line-up, but it would lose much of its charm and understated strength. There's room for some improvisation, notably on the opening title track where the strings dissolve for a Taylor/Wheeler duet where the trumpeter takes brief flight; but this is equally a tight arrangement, with the strings reentering and becoming dominant contrapuntal voices over Taylor's tango-esque rhythm before the pianist is given his own brief solo spot. "Some Days Are Better" is a feature for Wheeler, whose melody soars above the strings on one of the album's most hauntingly beautiful compositions, while both Taylor and Wheeler solo over the insistent rhythm of "Win Some, Lose Some," with the trumpeter's ability to reach into the stratosphere without becoming bold or brash remaining intact.

That Wheeler's voice remains this strong and his spirit this intrepid is proof that aging needn't mean a hardening of the mind. Other People would be a remarkable achievement for anyone, but for an artist nearing eighty, it's an encouraging example of music keeping both the head and heart young and strong.

Other People; Some Days Are Better; Win Some, Lose Some; More is Less; Nita; String Quartet n. 1; The Lucky Lady; The Unfortunate Gentleman.