Home » Jazz Articles » Sun Ra: Some Blues But Not The Kind Thats Blue

Sun Ra: Some Blues But Not The Kind Thats Blue 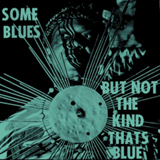 Pioneering bandleader Sun Ra recorded very few small group recordings in his lifetime. Those existing albums rarely focus on standard material, which makes Some Blues But Not The Kind Thats Blue unique in his vast discography. Taking up where the Evidence label left off in the late 1990s, Atavistic's Unheard Music Series has begun reissuing some of Ra's rarest and most intriguing sessions.

Following the 2007 reissue of the iconic albums Strange Strings (Atavistic, 1966) and The Night of the Purple Moon (Atavistic, 1970), Some Blues But Not The Kind Thats Blue unveils yet another facet of the wildly prolific innovator. Originally released in limited quantities on Ra's own El Saturn records, this 1977 studio album is augmented by a previously unavailable collective improvisation and two variations on "I'll Get By" recorded in 1973.

Among Ra's contemporaneous recordings, only Atlantis (Evidence, 1967), The Night Of The Purple Moon (Atavistic, 1970), Cymbals (Evidence, 1973), New Steps (Horo, 1978) and Other Voices, Other Blues (Horo, 1978) feature similarly stripped-down line ups, with none focusing on standards like this set.

Ra's take on standard material, as might be expected, is anything but. These slightly off kilter re- interpretations remain melodically faithful, while drifting into jaunty abstraction, unimpeded by rigid time signatures or conventional concepts of harmony and tonality.

A haunting reading of "Nature Boy" and an expansive take on "My Favorite Things" that features a stellar solo from tenor saxophonist John Gilmore, further cement Ra's reputation as an under-sung visionary and bandleader. Gilmore's progressive tenor excursions affirm why John Coltrane looked to him for ideas on modal improvisation.

Eschewing his usual array of electronic keyboards, Ra primarily plays acoustic piano on these old chestnuts, working intricately modulated variations from their classic chord changes and harmonies. With no bassist present on the majority of the tunes, Ra's left hand plies fractured bass patterns, laying down an unconventional, but swinging pulse.

The only non-standard tunes are the opening title track and "Untitled." The titular track rides a swaggering bluesy clip over a languorous modal groove, while "Untitled" is the album's only free improvisation, featuring a gaggle of caterwauling horns and some especially turbulent tenor from John Gilmore.

Sun Ra rarely had access to exceptional recording technology, and while this session is no exception, it is typical of the time and entirely listenable. Some Blues But Not The Kind Thats Blue is a welcome rediscovery featuring a devilishly askew take on the tradition, one can only wonder what the folks from Atavistic will uncover next.

About The Morehead Tavern