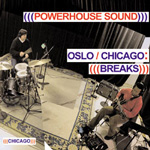 Vandermark conceived Powerhouse Sound in the summer of 2005 to explore composition focusing on the bass, rather than writing from the proverbial "top down." Inspired by the rhythms of James Brown, the dub experiments of Lee Perry, and the textural collages of Public Enemy, Vandermark arrived at a concept more funky, electronic and rockin' than anything he's done before.

Initially formed with a group of Scandinavians, the Chicago based leader decided to expand his experiment by forming a stateside touring ensemble with some local heavyweights. The set features one studio album by each ensemble playing a similar set of tunes, and the differences in instrumentation and approach reveal fascinating contrasts.

Vandermark's decision to focus on tenor saxophone, rather than doubling on his other horns, is surprising. He is in fine form throughout, sounding focused and driven, his improvisations following a linear logic tethered to the group's varied rhythms, from smooth dub pulses to crushing rock beats.

Equally surprising is Vandermark's decision to use the electric bass as the focal point of the project. Electronic sustain, subtle feedback and other EFX are used to maximize the creative potential of the often underappreciated bass guitar. With so much emphasis on this instrument, Nate McBride ends up being the session's unspoken MVP.

But the appearance of guitarist Jeff Parker (his first official recording with Vandermark) is the most revealing surprise. Parker's numerous efforts have been well documented, from Tortoise to the New Horizons Ensemble, yet his impassioned live playing has never been properly caught in the studio, until now. Although his hollow-bodied guitar tone occasionally lends a more traditional feel, he is no slavish bop revisionist. Demonstrating an affinity for extreme noise, Parker channels Sonny Sharrock and Sonic Youth for his most out playing on record, using feedback, EFX loops and big, blocky power chords to generate a vociferous electric assault.

Vandermark's collaboration with his Northern European brethren elicits a slightly different vibe than what he shares with his Stateside cohorts. The streamlined Chicago lineup is more adroit and often more aggressive. The Oslo sessions seethe with electronic textures, sampled voices and the added density of an extra bassist. Not all is scorch and burn, however, as there are numerous moments of respite and clarity, often arriving via hypnotic dub rhythms.

With the Vandermark 5 moving ever closer to formal composition and extended pieces, ensembles like this allow the freewheeling, collaborative side of Vandermark's genius to be revealed. For those even vaguely interested in the man's work outside of his flagship ensemble, Breaks is not to be missed.