BY JAKOB BAEKGAARD
October 3, 2010
Sign in to view read count 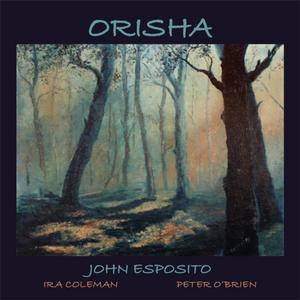 No matter the musical constellations he has worked in, deconstruction and reimagining of the jazz tradition has always been a crucial part of the art of pianist John Esposito. This is especially true when considering his take on the piano trio, one of the most tried and true formats in jazz.

Back in 2006, Esposito released Down Blue Marlin Road on his own Sunjump label. It was a record that showcased his encyclopedic knowledge of tradition, from swing and hard bop to avant-garde. Together with his cohorts, bassist Ira Coleman and drummer Peter O'Brien, Esposito reinvented standards like "Body and Soul" and "Autumn Leaves," tearing them apart and putting them back into strange pieces of fluorescent beauty.

Orisha is a more than welcome return for Esposito's trio, but this time around focuses almost exclusively on the leader's original compositions, with Coleman and O'Brien adding one composition each. While Esposito provides the basis for the group's musical interaction, the final result is, as Esposito emphasizes in the liner notes, the product of a joint effort: "I consider their playing on everything we do so compositional that the pieces I present them with become as much their compositions as mine."

The album is book-ended by the title track, which is a superior example of modernistic swing, Esposito making melodic fills shimmer in the midst of a sweeping hurricane of rhythm, where Coleman's walking bass is the steady foundation.

"Dreams," on the other hand, slows things a bit down, with a thoughtful piano introduction that mixes rollicking stride piano with ethereal impressionism, giving the feeling of Fats Waller covering Claude Debussy. However, when the rest of the trio enters, it's a whole other ballgame, and the music gradually heats up, with O'Brien providing a feisty, funky pulse, over which Esposito makes his harmonic curve-balls.

Esposito is a strong, if unconventional, melody-maker, as a sparkling tune like "Serenity" clearly shows, but despite its melodic accessibility, Orisha isn't easy listening. Its restless energy refuses to reside into the background and the dramatic ebb and flow of the music speaks of three artists for whom art is created in the here-and-now.

There are always two sides to the coin in the case of John Esposito: Tranquility is closely linked to chaos. It's this Eastern philosophy of yin and yang that is translated beautifully into a work of art that is as progressive as it is nostalgic and as aggressive as it is tender. It has been four years since the last Esposito trio record. Suffice it to say that it has been worth the wait.