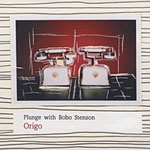 Origo, a wondrous album not to be missed, is the fourth release from the Swedish trio Plunge, and the second that extends it to quartet, including the pianist and Swedish jazz elder statesmen,Bobo Stenson.

While Origo stands on its own as engrossing music that captivates from its first notes, those who follow Plunge will immediately recognize it as both a document of the group's development and a synthesis of their last two albums, Refreshingly Addictive (Kopasetic, 2007) and Plunge With Bobo Stenson (Kopasetic, 2005).

The group has always emphasized free improvisation, but here it means spontaneous composition. Each piece is replete with themes or thematic phrases that are declaimed, developed, refracted and otherwise used as its kernel. While saxophonist Andreas Andersson (alto and baritone sax) and Stenson are naturally in the foreground, with their interplay being the most obvious, bassist Matthias Hjorth and drummer Peter Nilsson exhibit an extremely high degree of musical empathy.

Indeed, the music's attraction lies in how freedom, structure and development are balanced. While not being tonal in terms of key, or even modal, each piece does have a center of gravity defined by its phrase kernel, which is fleshed out by Stenson's pithy chordal clusters. Development feels logical while being unpredictable, as each player's contributions (both pro- and re- active) move the piece forward.

Furthermore, each piece has a mood, the sum total of which puts the album on the introspective and meditative side, combined however, with an underlying intensity borne of concentration and the lack of anything extraneous. Origo seems to simply unfurl before the ears in a timeless way, paradoxically demanding attention while simultaneously ignoring it.

"Alea Iacta Est" ("The die is cast") opens Origo and is the "hottest" track, echoing in that way "Lingua Franca" from the 2005 album. The triptych of "Origo," "Giordaniesque" and especially the nineteen-minute voyage that is "Metamorphing" dominates the album and defines its artistic rigor.

Origo is multilayered music for immersion, creating a perfect excuse for the repeat button and hours of becoming lost in its spell. Marvelous.