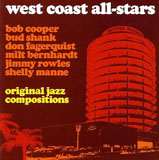 You can't judge a CD by its cover. Based on the title and the lineup on the front—Bob Cooper, Bud Shank, Don Fagerquist, Jimmy Rowles, and Shelley Manne—one would think that this would be a classic West Coast blowing session, something recorded on a Sunday afternoon at the Lighthouse, perhaps. However, the music contained on this CD is actually two sessions led by composer Dean Elliott, with the players largely confined to studio roles. One is a soundtrack, the other is dance music, and neither features a large dose of improvisation.

If you grew up in the seventies and eighties you're probably familiar with Elliott's music since he spent most of his career composing for Saturday morning cartoons (and a few tracks in you'll be instantly reminded of those dated Tom and Jerry and Bugs Bunny cartoons that were pale imitations of the originals.) The first session is the soundtrack to a film called College Confidential from 1956, one of the few film soundtracks that Elliott did. Most of the tracks are cast in the pseudo-jazz noir sound that Henry Mancini took to the bank in Peter Gunn and has been much duplicated since.

Of interest is the judicious use of the boo bam, a Polynesian bamboo instrument that was en vogue during the exotica movement (you've heard it before). Six of the tracks do feature a jazz combo with most of the players listed on the front having a go at reasonable jazz originals, but the session suffers the same fate as many soundtracks: the music is meant to accompany cinematic images and not stand alone.

The second session seems more promising, since it features the Dean Elliott Dance Band; surely this is a classic West Coast endeavor. Sadly, what we get is a dated run through of standards and originals. There's a heavy whiff of exotica here: harpsichords, xylophones, and wordless vocals are the main vehicle. What we're left with is an album of songs where the dance band sound is being updated to modern times. Unfortunately, the classic big band sound has proven to be timeless, and any attempts to monkey with it to appeal to a modern audience have fallen flat.

Main Title; Fauz Pas; Make the Scene; Break Up; Blues Train; Mad Dad; Lazy Lady; So Be It; Wild Ride; Gotta Be Hot or Cold; Decision; Prelude and Lovers Quarrel; Let's Go; Raid; So Be It; End Title; Who Cares; I've Had My Moments; A Gal in Calico; The one I Love; Kisses Don't Lie; A Fez He Sez; Say It With Your Eyes; Cozy Corner; Fine and Dandy; In the Port of Missing Dreams; There Will Never Be Another You; Hey Ma! I'm IN Love.

About West Coast Jazz All Stars