By BUDD KOPMAN
January 2, 2007
Sign in to view read count 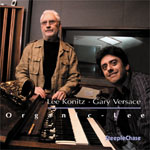 Lee Konitz, born in 1927, has been creating his own distinctive sound and playing in many different situations for about twice as many years as Gary Versace is old. The age gap, however, did not prove an obstacle to the production of this outstanding record, which pairs the two players on alto and Hammond B-3, respectively.

Konitz has made many duo records with piano, but he hesitated to play with a Hammond organ. Versace, however, is quite different from the average organ player, and Konitz agreed to make this very intimate and compelling record after listening to his work. Versace himself has been quite busy lately, playing and recording with a number of guitarists, including Rez Abbasi, Sheryl Bailey and Jonathan Kreisberg, as well as with alto saxophonist Loren Stillman.

Konitz's sound is very, very dry, almost as if he were trying to see how sparse Versace could make the organ sound. Versace responds by playing softly with a minimum of organ sounds, also giving Konitz plenty of room. The total effect of Versace's restraint, Konitz's timbre and style, and the tune choice of mostly ballads is that one almost feels present at the session, hearing the players think and respond during their solos and interactions.

The only original on the album is "A-Blues," and it does not scream its structure or progression, but rather softly implies that it is a blues. The other tunes are standards which vary in familiarity. While many listeners might not be able to hum Billy Strayhorn's "A Flower Is A Lovely Thing" or Dave Brubeck's "In Your Own Sweet Way," also included are the strongly contoured "Sweet And Lovely," "My Old Flame" and "Giant Steps" (which however, is converted into a delightful floating waltz).

Standards allow the true improviser to tease the listener and lead him or her through the tune/melody rather than just the changes, by touching down on the defining interval or phrase after spending time in the abstract. One would expect Konitz to be a master of improvisation, but Versace shows himself to be quite up to the challenge as well.

Organic-Lee is an extremely rewarding album on many different levels. The players are very exposed, and their musicianship is not hidden behind drums and bass. I was not prepared for the degree with which the record drew me in, but with each listen, I was further seduced. While both players ventured into the realm of abstraction, it became obvious that Konitz and Versace shared an enormous well of emotion, allowing them to make beautiful music together.

Old Folks; How Long Has This Been Going On; A-Blues; In Your Own Sweet Way; Giant Steps; A Flower Is A Lovesome Thing; Sweet And Lovely; Come Sunday; My Old Flame.