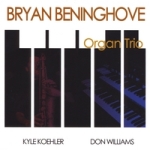 Organ Trio is Jersey City saxophonist/composer and bandleader Bryan Beninghove's debut self-titled album with his very able organ trio that performs regularly throughout the Jersey City/New York area. A rather busy band leader, Beninghove also leads the six-piece Big in Jersey light ensemble and the Bryan Beninghove & Hangmen Quintet. But it is his Organ Trio group with which he has chosen to devote much of his time resulting in the release of this, their first recording.

It is refreshing to hear a trio (in favor of the organ and sax) eschewing the typical piano and bass rhythm section that predominates today's jazz venues and recordings. Beninghove's trio resembles many of the great organ trio's of the 50s and 60s where the Hammond B-3 is paired with a saxophone delivering a distinctly different sound than what one is accustomed to hearing with the standard piano trio.

Beninghove is joined here by Kyle Koehler on the organ and Don Williams pounding the drums. Organ Trio captures a swinging session of bop split between several studio and live tracks covering four originals and five jazz standards. The program opens up with a Beninghove original "Tape Side Up" featuring the saxophonist on a tenor tare eventually giving way to Koehler's anticipated organ grind.

Wayne Shorter's "Adam's Apple" is given a simple but explosive arrangement highlighting the player's more than ample chops on their instruments. "I've Never Been In Love Before" is one of Frank Loesser's oft recorded standards and this rendition, recorded live, showcases Koehler on lead providing a dynamite performance. Beninghove's other original "Sam Spade" shares the same coolness as the film character it is titled for, played by the group in a semi-hard bop style with Williams distinguishing himself with a blistering drum roll.

Another excellent highlight on this album is Beninghove's take of the Green/Heyman classic "Out of Nowhere," where the saxophonist delivers some of his best tenor phrasings of the entire album. But don't miss his interpretation of the immortal jazz ballad "Everything Happens To Me," it's one of the finest versions of this tune around, blessed by the soulful backup play of Koehler. This tune is just wonderful to hear.

When you get to the finale "My Secret Love," you will most likely want to press replay to take in another dose of Organ Trio because the music is so inviting and pleasurable, one listen may not be enough to savor the experience. Bryan Beninghove and crew assemble an exciting set of contemporary straight-ahead jazz that leaves quite an impression. It's a debut of tasteful music that can be appreciated by casual listeners and a discerning jazz audience.