This is definitive Garcia-Fons... where the lines between cultures and music's metaphors are as blurred as vibrating strings. 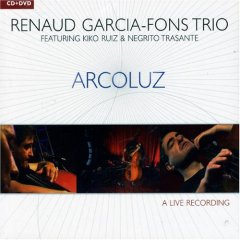 Bassist Renaud Garcia Fons hears music polyphonically—in using this term, it is hoped that you will "read" it as the Greeks had intended it to be understood: as music "having many sounds or voices." Listening to almost any of the music Garcia-Fons writes, arranges and plays is like undertaking a fascinating and memorable expedition.

While many musicians employ polyphony, it is extremely rare for any musician to successfully make this a consistent feature of his or her art without it becoming tedious. Although there are folk musicians—griots in Africa, mugami musicians in Azerbaijan and the throat singers of Tuva, in jazz the innate ability is rare. However, the late German trombonist, Albert Mangelsdorf, had this great gift, as does reed player Pharoah Sanders, who was probably born with it. It appears that Garcia-Fons has it too. This is why listening Arcoluz makes for such a magnificent experience. The fact that it is a CD and DVD package made from a live performance at Schloss Elmau in Germany makes it even more exciting.

In many ways, it was Garcia-Fons's Oriental Bass (Enja, 1997) that defined his music. In its liner notes he wrote, "I had a dream about a bass—half Gypsy, half Mediterranean—that traveled from India to Andalusia, passing by the Mediterranean, north or south. Yet the bass is neither a traditional nor an oriental instrument. But its range of sonorities and the way it is played upon—both pizzicato and con arco—seem to make it feel comfortable in the neighborhood of certain instruments at home in the oriental world..."

The point of the dream is where the spirit of Garcia-Fons likes to roam and the key to that lies in two words: "oriental world." A Parisian, Garcia-Fons has Spanish heritage and this brings a palette that is almost certain to sweep across the tonal colors of the Mediterranean, including North Africa and sometimes across the Arabian Gulf, to India as well. Once you get past the fact that Renaud Garcia-Fons was making a case for his Oriental-sounding bull-fiddle on that eponymous album, he was defining his voice, the sounds he hears and dreams in and the resultant music in his extraordinary art.

It bears mention that the title of the album, Arcoluz and its first track, of the same name, set the tone and manner of the music to follow. The track—with its con arco opening, much like bassist Charles Mingus's memorable introduction to his own magnum opus, "Meditations On Integration"—is a melancholic and haunting evocation of the dusty landscapes of Andalusia in southern Spain. The mood breaks when flamenco guitarist Kiko Ruiz's fingers join in a now-skipping pizzicato bass to mimic a skittish tumbleweed as it—and we—rush on to discover a music unraveling as if by magic. Listening to the CD, hearing music that you can only hear performed live, may be a daunting task. One hears unmatched virtuosity, an interlocking of instrumentation—bass, flamenco guitar and percussion of many tonal colors and rhythmic persuasions from drummer and percussionist Negrito Trasante. Notes assault the pleasure centers of the brain. You begin to gasp in wonder at the technical abilities of the musicians. Then you also find yourself moved by the consummate dynamics of the group playing music that is steaming with passion. It is music of genius, but also music that bubbles out of a soul consumed by the fervor at the center of its very being.

Track after track leaves you breathless, each with a lyrical beauty or a feverish energy all its own. "Berimbass" finds Garcia-Fons's bass at the front of the trio, leading his cohorts on a South American journey as he creates a magnificent edifice pizzicato by tapping—at times—his bow on the strings, then back again to con arco as the music pirouettes across continents, returning to pay homage to the berimbau as a bass violin. On "Anda Loco," Garcia-Fons traverses the entire soundscape of his five bass strings. Especially when he bows in the absolutely upper-register ostensibly by the bridge or just below, between bridge and tailpiece. Clearly his intent to add that 5th string was no mere fanciful act. The song—a suite in three parts really—builds from melancholic Mediterranean to a swinging interplay between guitar and percussion with the bass controlling and conducting the pace and sweep of the song. Ruiz's choruses suggest a technician of the highest order and Trasante pulls out his full bag of tricks from the cajon (that box, which houses the resonant strings, on which the percussionist sits) to claves, cowbell, rushes of passion on snare, punctuated by splashes of cymbals.

"40 Dias" puts paid to the theory that may suggest mere virtuosity. Apart from the obvious significance of the "40 days," there is an almost mystical fervor in this piece. Its probing motion also suggests an expansion of musical articulation reminiscent of saxophonist John Coltrane. Almost magically, Ruiz appears to coax a piano-like sound out of his guitar, a tribute to his extraordinary touch.

"Entremundo" is a tour de force of musical cultures colliding—from classical orchestral lines to swinging jazz idiomatic phrasing. This is the definitive trio piece and the definitive Garcia-Fons credo: that the lines between cultures and music's metaphors are as blurred as vibrating strings. The dynamic tension in this piece is dramatic and will lead the listener to dizzying heights before bringing him or her down to the earth pulsating with primal song. "Entre Continentes," picks up where "Entremundo" leaves off. Its detailing is sharper by contrast. But its probing attack is just as passionate and deeply spiritual—another suite of music Coltranesque in mode and scope. Negrito Trasante is particularly spectacular as he solos on a spectacular array of percussion instruments tuned at such a wide variety of the known tonal spectrum, that he succeeds in creating a new rhythmic soundscape all his own.

The companion DVD in this twin package features 85 minutes of music and visual footage. Also shot live, this is a splendid opportunity to discover what makes Renaud Garcia-Fons the unique musician that he is. That his virtuosity is unbridled is a foregone conclusion. He must surely be well on the way to becoming one with his own teacher, Francois Rabbath, and this suggestion is made at great risk of blasphemy: approaching the skill and passion of the classical master, Serge Koussevitsky, while he takes the jazz bass that much further in the mould of Glen Moore of Oregon. The DVD has the same track listing as the CD, but technically sounds a lot more sonorous. You will also marvel at Garcia-Fons's extraordinary ability to bow and strike the strings at the same time creating the spectacular introduction to "Entremundo." This is far from conventional, combining the beating of the strings (like a berimbau), with the classical con arco and the cross-cultural pizzicato playing.

The DVD also makes eminently clear just how much of the music is composed and how much is improvised (a great deal). The viewer will see just how the dynamic of the group is built. Although the foundation is clearly Garcia-Fons, as composer and instrumentalist/improviser, the music is distinctly collaborative. Ruiz and Trasante are vital forces, as much involved in the development of the ideas in the music as is Garcia-Fons, whose dominance may also be a factor simply because of the frequency response of his instrument. There is also the fact that the bass is firmly front and center of the trio, which suggests the Renaud Garcia-Fons's contribution to the development of the instrument. His detractors—some celebrated jazz musicians included—may suggest he has no sense of the blues. But even the Mediterranean has the blues. And where did it all originate if not in Africa, a continent that resounds deeply in the music of Renaud Garcia-Fons? Some part of Garcia-Fons's place in modern music must also be attributed to his unique fingering and intonation—made possible in no small measure due to the depth of the frequency response of this 5-string bass.

The production-values of the DVD are also top-flight. Rendered in stereo at 48khz/16 BIT mapping, the picture and sound are each exemplary. Antoine Canella and Bertrand Fara, the directors of photography, and the camera work of Bechir Benfaida, deserve huge credit. The mixing skills of Walter Quintus and the mastering of Antoine Demantke cannot be over-emphasized. This must rank with some of the finest digital recording and mastering on disc. The bonus interviews with English, French, German and Spanish subtitles mean that this DVD will have greater appeal than anyone can imagine. This is a truly remarkable and landmark audio-visual experience from Renaud Garcia-Fons and Mathias Winkleman at Enja.